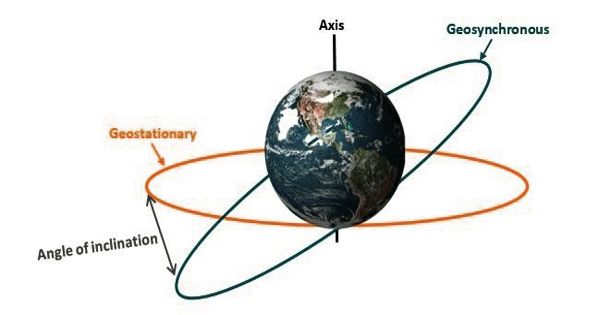 Geostationary orbits 36,000km from the Earth’s equator are best known for the many satellites used for various forms of telecommunication, including television. It also referred to as a geosynchronous equatorial orbit (GEO), is a circular geosynchronous orbit 35,786 kilometers (22,236 miles) above Earth’s equator and following the direction of Earth’s rotation. Weather monitoring satellites like GOES are in geostationary orbits because they have a constant view of the same area. In a high Earth orbit, it’s also useful for search and rescue beacons.

Signals from these satellites can be sent all the way around the world. An object in such an orbit has an orbital period equal to the Earth’s rotational period, one sidereal day, and so to ground observers, it appears motionless, in a fixed position in the sky. Telecommunication needs to “see” their satellite all time and hence it must remain stationary in the same positions relative to the Earth’s surface.

A stationary satellite provides the advantage for remote sensing that it always views the Earth from the same perspective, which means that it can record the same image at brief intervals. The concept of a geostationary orbit was popularized by the science fiction writer Arthur C. Clarke in the 1940s as a way to revolutionize telecommunications, and the first satellite to be placed in this kind of orbit was launched in 1963.

The geostationary orbit is a special case of the geosynchronous orbit, which is any orbit with a period equal to Earth’s rotation period. Communications satellites are often placed in a geostationary orbit so that Earth-based satellite antennas (located on Earth) do not have to rotate to track them but can be pointed permanently at the position in the sky where the satellites are located. One disadvantage of geostationary orbits is the great distance to the Earth, which reduces the achievable spatial resolution.

The geostationary orbit is a unique resource used by many satellites: its parameters must satisfy very precise conditions to have a fixed position in relation to the Earth. Weather satellites are also placed in this orbit for real-time monitoring and data collection, and navigation satellites to provide a known calibration point and enhance GPS accuracy. This arrangement is particularly useful for observations of weather conditions.

A spacecraft in this orbit appears to an observer on Earth to be stationary in the sky. Geostationary satellites are launched via a temporary orbit and placed in a slot above a particular point on the Earth’s surface. This particular orbit is used for meteorological and communications satellites. The orbit requires some stationkeeping to keep its position, and modern retired satellites are placed in a higher graveyard orbit to avoid collisions.