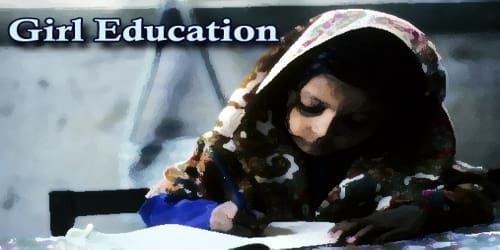 Introduction: Girl/women education is essential for the appropriate social and economic development of the country. Education is an essential part of a living being, whether it’s a boy or a girl. Education helps an individual to be smarter, to learn new things and to know about the facts of the world. For many developing countries, gender inequality is a massive issue, with most biases about women’s “roles” starting at birth. These prejudices affect the economy, sustainability, and education.

Nowadays girl education is necessary and is also compulsory because girls are the future of the country. Educated women yield a positive impact on Indian society through their contribution to professional fields like medical, defense services, science, and technology. They do good business and are also well-versed in handling their home and office. An improved economy and society are the outcome of a girl’s education. Educated women can also help in controlling the population of the country by marrying at the right or later age in comparison to the uneducated women.

Importance of Girl Education: There are a lot of advantages involved in the education of girls. Education is a boon for girls in this age of economic crises. A well-educated and grown-up girl can play an important role in the development of the country. An educated girl can share the load and burden of the men in different fields. A well-educated girl if not forced to marry in her early age, can serve as writer, teacher, advocate, doctor, and scientist. She can perform very well in other important fields too.

Educated girls can make informed choices and from a far better range of options. Educating girls saves lives and builds stronger families, communities, and economies. An educated female population increases a country’s productivity and fuels economic growth. Some countries lose more than $1 billion a year by failing to educate girls to the same level as boys.

Female education and the environment: Education of girls (and empowerment of women in general) in developing countries leads to faster development and a faster decrease in population growth. It, therefore, has a significant impact on environmental issues such as climate change. The research network Drawdown estimates that educating girls is the sixth most efficient action against climate change (ahead of solar farms, nuclear power, afforestation, and many other actions).

Educated women can, without doubt, handle their family more efficiently. She can make each family associate accountable by imparting good qualities in children. She can take part in the social workings and this can be a great contribution towards the socioeconomic healthy nation.

Contribution of Education: There are three major roles which are performed by women in her course of life; A daughter, a wife and a mother. Except for these significant duties, they have to establish themselves as good citizens of a nation. Hence, it is essential to give women a diverse kind of education from the one given to boys. Their learning should be in such a way that it should enable them to do their duties in an appropriate way. By education, they become fully mature in all fields of life. An educated woman is well aware of her duties and rights. She can contribute to the development of the country in the same way as men do.

Conclusion: Education helps women to be more productive in their work. A knowledgeable woman has the skills, information, talent, and self-confidence that she requires to be a superior mother, employee, and resident. To extend the significance and progress the level of women education all over the country, proper awareness programs are necessary, especially in rural areas. A knowledgeable female can teach her whole family and also the whole country.