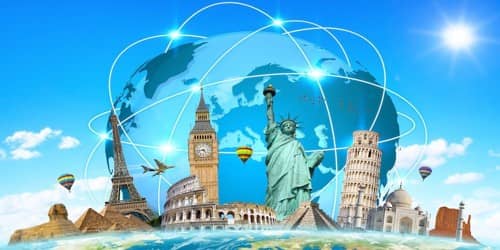 Globalization means a worldwide working policy. By the term Global village, we mean the world to be a single community linked by telecommunications and internet connections. It has become a buzzword in the new era of international relations. The term was first used by Marshall McLuhan.

Whether the advance was the printing press, the radio, the telephone, or the TV, all of these things affected us globally. Although globalization is mainly connected with business, trade and international relations, it can no longer be viewed from that perspective alone. The tide of globalization is now encroaching into other spheres too. Sattelite T.V. channels and the internet are bringing all sorts of different customs and behavior into our homes. Money markets and multinational corporations, satellite television, internet, and intercontinental missiles, all seem to mock at boundaries that are no longer scared.

Under the present influence of globalization global cultures are steadily getting integrated with local cultures. Different cultures are constantly interacting. Every independent nation of this global village has its own traditional social values, beliefs and attitudes.

The idea of global trade which was inherent in capitalism has now become universalized. Taking an idea of globalization capitalization/capitalism seems to be on triumphant much creating opportunities for the capitalist’s countries rather than developing ones. The industrially developed capitalist countries in the name of help or, assistance and co-operation are ruthlessly exploiting the cheap labor available in poorer countries.

In the field of economics, transnational is growing easier and cheaper, and the belief in national self-sufficiency is being steadily destroyed. The exploited and impoverished workers of the developing countries are no match for globalizing powerful capitalism. Hence or consequently, a gap between wealth and pauperism is ever-widening. The discipline of present-day international financial markets induces national governments to manage their economies more efficiently.

The information revolution is another factor that has significantly changed the world picture, piercing the protective cloak of the most insular of nation-states. The global village needs a common language for international communication. English with its many different reasons has achieved the honor of being the international language. It has already crossed the national borders to reach people who speak their languages. Ideology and culture, again, are not enough for nation-states to dissolve their identities into a large entity.

Even in the matter of free trade, countries would like to preserve the power to decide how much of the free-trade rules suit them in particular. Basically, globalization is a process of expanding trade and commerce all over the world by creating a borderless market. But it has had a far-reaching effect on many aspects of life. With the development of hi-tech communication media and rapid transportation facilities, the world has come closer.

We can now learn in an instant what is happening in the farthest corner of the world are like families in a village. They can even share their joys and sorrows like next-door neighbors. Now the people of the world feel far more close to one another than in the past, however, separated by vast distances. If one country is in distress, others can immediately come to its assistance. These scientific and technological developments have almost revolutionized life.

To conclude globalization can bring happiness to everyone when all people of the world can travel in the same vessel in the same cabin without any distinction between caste, creed and of racial discrimination. The very fast and effective means of travel and communication have turned the world into a global village.