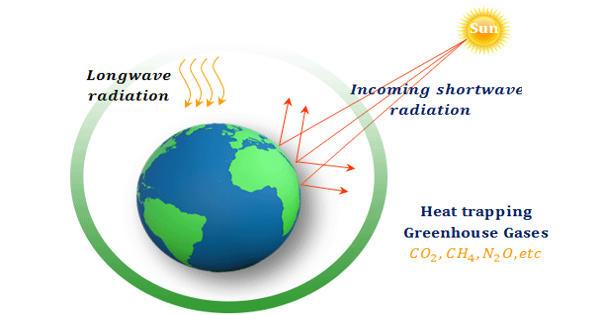 Global Warming and the Greenhouse Effect

Introduction: The greenhouse effect is a natural warming process of the earth. The theory is that when the sun’s energy reaches the earth, some of it is reflected back to space while the rest is absorbed. The absorbed energy warms the earth’s surface which then emits heat energy back toward space in the form of longwave radiation. This outgoing radiation is partially trapped by greenhouse gases such as carbon dioxide, methane, and water vapor which then radiate the energy in all directions, warming the earth’s surface and atmosphere.

Effects of Global Warming: Global warming affects many different facets of life on earth. There will be winners and losers, even within a single region. But globally, the losses are expected to far outweigh the benefits. The regions that will get most severely affected are often the regions that emit the least greenhouse gases. This is one of the challenges that policymakers face in finding fair international responses to the problem. Some of the likely effects of global warming include:

Rise in Sea Level: It is a serious worry that rising sea levels from the melting of the polar ice caps could severely flood many countries. A rise in sea levels of one meter, which many experts are predicting by the year 2100 (and some as soon as 2030), would flood 15 percent of Egypt, and 12 percent of Bangladesh. The Maldives in the Indian Ocean would almost completely disappear.

Water Resources: Many of the major rivers in Europe and Asia emanate from the glaciers in the mountains. For example, the whole of the grain-producing northern belt of India is fed by rivers that originate from glaciers in the great Himalayas; electricity is also produced wherever the rivers are dammed. Over the years it has been seen that because of global warming the glaciers are receding at an alarming rate, impacting the flow of the rivers, causing a reduction in the production of food grain, and electricity.

Health and Disease: It is a known fact that people today are inflicted by many new diseases unheard of in the last century. An increase in CO2 levels in the cities is the cause of pollution, and the effects of pollution are well documented. Global warming is also responsible for the introduction of some new diseases. Bacteria are known to be more effective and multiply much faster in warmer temperatures compared to cold temperatures. The increase in temperature has led to increasing in the microbes that cause diseases.

Agriculture: It is said that should there be a few degrees heating up of the earth it would have a potentially negative effect on the production of corn in North America, where much of the world’s food grain comes from. This would result in higher prices of food grains causing starvation in third world countries. On the other hand, it may so happen that colder regions further north would be able to grow crops that have never been cultivable before. However, it is a known fact that the availability of cultivable land decreases as you go north.

Ecosystems: We are aware of the fact that the ecosystem of the world is fragile and delicately balanced. Any change brought about by global warming could result in disastrous consequences. Some of these the world has experienced in the last few decades by way of floods, droughts, frequent hurricanes, tornadoes, and severe cold waves. There has also been an increased number of forest fires in the recent past.

Different views: There is, however, a very divergent view on global warming facts. Many skeptics are of the view that global warming is a good and natural phenomenon. There are various benefits of global warming, arid as per them it will increase humidity in tropical deserts, melting of snowbound areas will result in vast tracks of land getting available for agriculture, the increase in carbon dioxide in the atmosphere will trigger plant growth. Another argument for global warming is that the earth has been gradually warming up through history, and nature will continue to adapt to these changes.

Conclusion: Despite the views of some skeptics mentioned above, there is a recorded negative impact of global warming. Due to the direct link between global warming and the greenhouse effect, the only way to turn the situation around is for everyone to do them to reduce the emission of greenhouse gases. So what can be done in order to keep best all of that from happening’ We need to stop pulling so much pollution into the air? No matter what there will always be a little bit of Carbon Dioxide emitted into the atmosphere. If we could just limit all the coal and fossil fuels that we burn, there will not be so many “greenhouse gases” and it would keep all of that from happening so quickly. Reduction of use of fossil fuels, use of alternate sources of energy, restricting the emission of pollutants by industries, reducing forest degradation, eliminating the use of CFCs, and planting more trees will help us overcome this seemingly insurmountable problem.