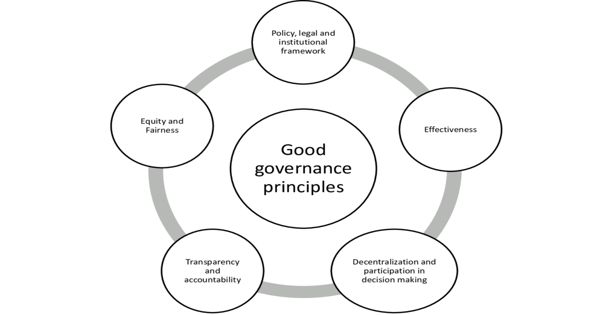 In the last decade, development literature increasingly emphasized the role played by good governance in maximizing the effectiveness of the development dollar and in achieving sustainable development. What is governance? The term ‘governance’ is used to describe the way in which a country is governed. It covers the range of political, economic, and administrative decisions made by the government, business, and civil society sectors as they manage a country’s resources and affairs.

What is good governance?

The United Nations Economic and Social Commission for Asia and the Pacific (ESCAP) define good governance as:

‘Good governance has eight major characteristics. It is participatory, consensus-oriented, accountable, transparent, responsive, effective and efficient, equitable and inclusive, and follows the rule of law. It assures that corruption is minimized, the views of minorities are taken into account, and that the voices of the most vulnerable in society are heard in decision-making. It is also responsive to the present and future needs of society.’

Democracy and good governance: Many countries and international organizations regard democracy as being the most effective and fairest system of government. In a democracy, the bad government can be voted out, which provides governments with an incentive to implement policies that will be good for the whole country and not just a favored minority. An effective democracy has good institutions and active and informed citizens able to exercise their political and civil rights and to push for reforms that otherwise may not take place. Yet some characteristics of democracy can impede good governance. Governments may sacrifice sound policy for popularity in the polls and short time frames make it difficult to implement long-term plans.

There are close links between good governance and human rights:

The ‘characteristics of good governance guarantee civil, political, social, and economic rights. Citizens are able to freely express views and influence the government for change without the fear of being arrested, tortured, or discriminated against. Citizens are legally protected in relation to their property, personal security, and liberty. Adequate provision of basic needs, education, and health services, and pay enables people to fully participate in the community and decreases corruption.

Corruption and good governance: Corruption, the abuse of one’s official position for personal gain, is the extreme opposite of good governance. It is a major problem in many countries and is increasingly recognized as the greatest obstacle to achieving sustainable development. It has political, social, economic, and environmental costs. Corruption undermines citizens’ trust in public institutions and offices of government, eroding the values of democracy. It increases costs for companies to do business, and decreases the tax revenues available to governments to provide public facilities such as schools, roads, and hospitals. Although the kinds of practices that are considered corrupt differ among cultures, all cultures do have a framework of acceptable behavior.

Fighting corruption requires strong political will, an active civil society, a free press and freedom of information legislation coupled with a strong, clean judicial system. It takes time to change behaviors and attitudes as well as resources for people in official positions not to be tempted to engage in corrupt practices.

The global agenda: The critical importance of democratic governance in the developing world was highlighted at the UN Millennium Summit in 2000, where the world’s leaders resolved to ‘spare no effort to promote democracy and strengthen the rule of law, as well as respect for all internationally recognized human rights and fundamental freedoms, including the right to development. A consensus was reached which recognized that improving the quality of democratic institutions and processes, and managing the changing roles of the state and civil society in an increasingly globalized world, must underpin national efforts to reduce poverty, sustain the environment and promote human development.

Governance and Anti-Corruption (World Bank): The World Bank’s governance program supports countries in improving governance and controlling corruption. Programs take a strategic and integrative multi-disciplinary approach by: going beyond public sector dysfunction (the ‘symptom’) to assist countries in integrating institutional, regulatory, and economic reforms (the ‘fundamentals’); implementing rigorous empirical diagnostics and analysis, bringing about collective action, through participation and broad-based bottom-up coalitions, building partnerships within countries and other international or regional institutions; moving beyond conventional training to knowledge dissemination, policy advice based on the latest research and operational findings, and participatory and consensus-building activities; and scaling up the impact of activities, utilizing new tools for knowledge dissemination, innovating, and taking managed risks.