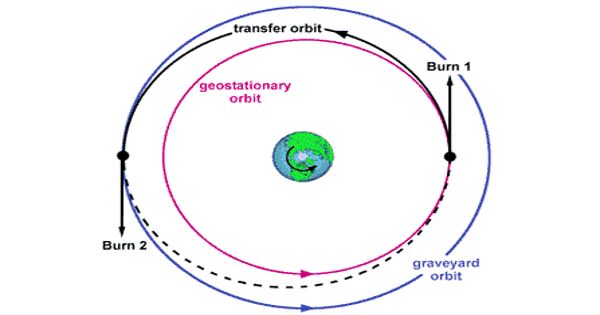 Like every other machine, satellites do not last forever. A graveyard orbit also called a junk orbit or disposal orbit, is an orbit that lies away from common operational orbits. A satellite that’s watched Earth for 20 years is retiring to a so-called graveyard orbit high above the Earth that puts out-of-commission satellites out of harm’s way. Whether their job is to observe the weather, measure greenhouse gases in the atmosphere, or point away from Earth to study the stars, eventually all satellites grow old, wear out, and die, just like old washing machines and vacuum cleaners.

Graveyard Orbit is an earth orbit into which communications satellites may be moved at the end of their operational lives, where there is no risk of their interference or collision with working satellites in their normal orbits.

One significant graveyard orbit is a super synchronous orbit well above the geosynchronous orbit. For satellites orbiting closer to Earth, operators lower the orbit of a decommissioned satellite so that it will naturally re-enter the atmosphere within 25 years (known as the “25-year Rule”). For the closer satellites, engineers will use its last bit of fuel to slow it down. As the satellite begins to fall back toward Earth, the heat from air friction will burn up the satellite, causing it to disintegrate before it ever reaches the surface. That way, it will fall out of orbit and burn up in the atmosphere. 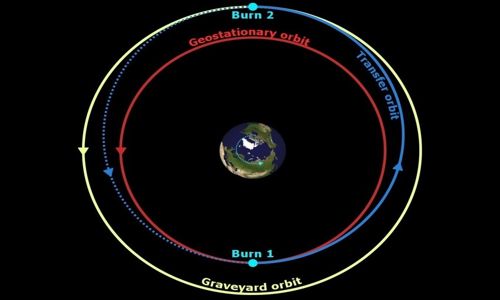 The “graveyard orbit” is not an actual orbit but, rather, a region, where old satellites will not pose a threat to those still in service. However, the use of the 25-year rule is permitted only if an operator can show by analysis that the probability of injury or property damage is less than 1 in 10,000.

The second choice is to send the satellite even farther away from Earth. If the operator determines that this is greater than 1 in 10,000, a “controlled deorbit” is required.  It can take a lot of fuel for a satellite to slow down enough to fall back into the atmosphere. During a controlled deorbit, engineers use the satellite’s remaining fuel to slow it down until it falls out of orbit into a pre-determined broad ocean area dubbed the “Spacecraft Cemetery.”  That is especially true if a satellite is in a very high orbit. For many of these high satellites, it takes less fuel to blast it farther into space than to send it back to Earth.