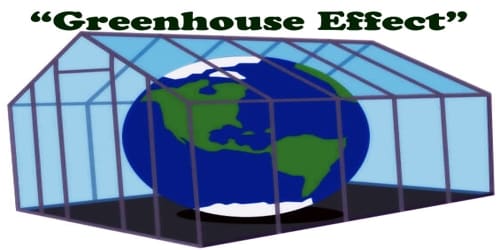 Greenhouse effect is the gradual warming of air surrounding the earth as a result Of heat being trapped by environment pollution. It is a dangerous reactive type of effect that influences our nature violently. There are many causes of greenhouse effects. The deforestation and burning down of the tropical forests, the rapid growth of unplanned industries, overpopulation, pollution, the use of chlorofluorocarbons (CFCs), the use of detergents, increase of temperature, etc. are the causative factors of the greenhouse effect. The term “Greenhouse Effect” keeps being used in science despite being a known misnomer. While both an atmosphere and a greenhouse retain heat, they do it in fundamentally different ways: an atmosphere reduces radiative loss from the surface to space, a greenhouse blocks convective loss. However, the major factor of the greenhouse effect is carbon dioxide. The greenhouse effect causes natural imbalance. It is dangerous for living creature on earth. As a result of the greenhouse effect, the temperature will rise to a great extent. So the ice in the Arctic region will start to melt. Many islands, cities near the sea, many parts of our country will go under the water of the sea. This will also catastrophically reduce mankind’s ability to grow food, destroy or severely damage wildlife and wilderness, raise sea levels and thereby flood coastal areas and farmland. The alarming news about Bangladesh is that as a result of the rise of the sea level, the lower southern part of the country may one day go under water. So, measures should be taken to prevent such an undesirable situation. We should stop deforestation and control the use of chlorofluorocarbons (CFCs). Above all, we should plant more and more trees around us.