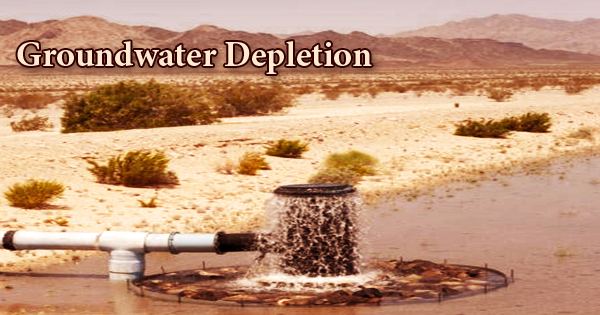 A key problem associated with groundwater usage is groundwater depletion, a concept often described as long-term water-level declines caused by continuous groundwater pumping. The available amount of fresh groundwater in coastal areas, where many of the world’s largest cities are located, is limited by seawater intrusion and upconing, which are in turn caused by head drops in the aquifer. As depletion continues globally, its consequences are worsening, reflecting the need for objective problem analysis and potential solutions. In a changing physical and social environment, this article explores potential options for assessing and controlling groundwater depletion. It is possible to view groundwater depletion from two distinct viewpoints. In one, depletion, regardless of water quality considerations, is taken literally and simply as a decrease in the amount of water in the saturated region. A second viewpoint sees depletion as a decline in the fresh groundwater available volume in storage. The world’s main source of available, freshwater is groundwater. In many parts of the world, particularly where there is no supply of surface water, domestic, agricultural, and industrial water needs can only be met by the use of underground water. Most generally, groundwater depletion happens because of the frequent pumping of water from the field. Some groundwater depletion causes and impacts are neither clear nor easy to determine. Water flows freely into the aquifers known as saturated rocks. Large and small aquifers exist, and they are the reservoirs of deep water that collect and retain water, allowing us to pump it for use. The quantity of water kept by aquifers is beyond amazing and can give us billions of gallons of water a day. Although this volume of water appears abundant, groundwater is a significant contributor to the supply of fresh water to the Planet and is responsible for supplying up to 40% of the world’s freshwater. It does not, therefore, have the capacity to recollect fast enough to be continuously sourced for our use.

Hydrological processes worldwide will be significantly impacted by global climate change. Glacial ice and rising ocean temperatures are contributing to an increase in sea levels. The frequency and intensity of floods and droughts are expected to increase on the continents, while higher temperatures will decrease winter snowpack and speed up spring snowmelt from mountainous regions. Unchecked, the consequences of these changes can be compounded by groundwater depletion; conversely, regulated groundwater depletion management can lead to their mitigation. There is more than most people believe, an interaction between the water in lakes and rivers and groundwater. Some of the water flowing into rivers, and sometimes a great deal, comes from the infiltration of groundwater into the bed of the stream. Groundwater in most physiographic and climatic settings contributes to streams. The proportion of stream water that comes from the inflow of groundwater varies depending on the geography, geology, and environment of an area. The extent of groundwater depletion from storage can be so high worldwide as to constitute a measurable contributor to the increase in sea level. The total amount depleted from the High Plains aquifer, for instance, corresponds to about 0.75 mm, or about 0.5 percent, of the observed increase in sea level during the 20th century. Reducing future depletion of groundwater (and rising the storage of groundwater) will help to minimize the future sea-level rise in a small way. Sometimes, the soil collapses, compacts, and drops as water is withdrawn from the soil. This depends on a variety of variables, such as the soil and rock type below the surface. Land subsidence, mostly due to the removal of subsurface water, is most frequently caused by human activities. The activities that contribute to the depletion of groundwater come primarily from humans, but a portion of it also comes from changes in our environment and can speed up the process. It’s up to us to conserve water; only when appropriate can we use it. Also, carefully use water, and think of not wasting a single drop of it. Find an alternative option instead of using it for some lavish reason. A smart way to conserve drinking water could also be to avoid water contamination. Rainwater irrigation will provide the greatest contribution to sustaining the level of groundwater.