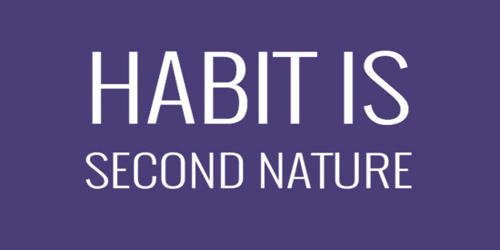 Habit is a Second Nature

Habit is a Second Nature

Habit means a pattern of behavior that is regular and which has become almost automatic as a result of repetition. It has been rightly said that habit is second nature. It means that if we make a habit of doing something, it creates a particular pattern of our behavior. That is, what we do often today, we will soon begin to do always tomorrow, and thus the habit will grow to be a part of our natural self. For habit, whether good or bad the basis of character and a man is regarded by society according to his habits and disposition. This pattern of behavior becomes almost automatic with us as a result of the repetition of the same thing for a quite long time.

We should be very careful about forming our habits. Our behavior is dictated by our nature. It does not require any training; it is automatic. Some are in the habit of forgetting to do things or of mislaying things. Some have a habit of being always late; some of giving up a job after the first attempt. Some are habitual late-rises; other is always slow; habit causes loss to one and irritates others.

The habit often hardens into superstition. Syed Kirmani, once India’s Test Wicket-Keeper, would go to play only after touching the Holy Quran. Pandit Nehru used to get up from bed in the morning with Sirshansan i.e. standing on his head. An eminent statesman could not start talk except by swearing.

The best way, therefore, of building up character is to form good habits. One should cultivate only the habits that are the earliest seeds of habit, of course, sown by the child’s tendency to imitating its elders. Therefore, it is important that grown-up people should be particularly careful of their behavior before little children. This sort of automatism is the habit to act upon the thought.

Habit is the second nature means that according to our nature and surroundings, we develop that habit. Therefore habit should not be limited to routine activities only. They must not paralyze thought and the power of judgment. In the matter of laying our bed and going to sleep and arranging our day according to routine, it pays to follow a settled course of habit. But in the higher things of life in making decisions, in operating our will, what is needed is not a settled habit, but the rational exercise of our free will.

The needs of society develop in men some good habits. Let us, therefore, without losing our independence, develop habits of punctuality, courtesy, truthfulness, obedience, and charity is the virtue necessary for living a good life.