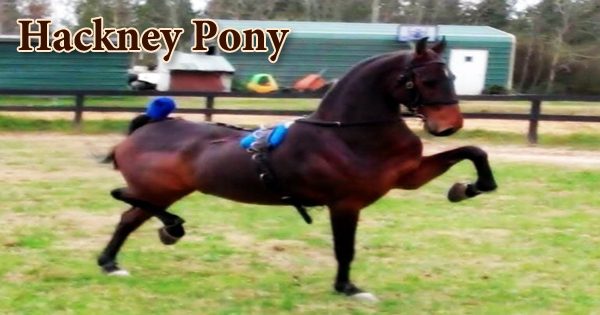 Hackney Pony is a heavy harness pony breed that is almost exclusively used as a show pony. It is descended from a hybrid between a Hackney horse and a Welsh pony. They were originally designed to pull carriages, but they are now mainly used as display ponies. The breed does not have its own studbook, but in all countries with an official Hackney Stud Book Registry, it shares one with the Hackney horse. Hackney ponies are divided into groups based on their height, which ranges between 11.2 and 14.1 hands (about 46 to 57 inches, or 117 to 145 centimeters). Hackney ponies are classified into six styles based on their show ring performance, mane, tail appearance, and height, including Hackney Roadster, Hackney Cobtail, Harness Pony, Show, Country, and Park Pleasure Driving. The Hackney pony isn’t a wimpy little thing. He’s vivacious, lively, astute, and maybe a little tense. These ponies, on the other hand, are often endearing and lovable. They love being fussed over because they are show ponies. The pony he created was inspired by Welsh Pony blood and had long trots similar to the Hackney Horse. The Hackneys were well-known for their trotting ability by the end of the nineteenth century. These carriage ponies were elegantly driven in both the United Kingdom and the United States when automobiles were uncommon. Cars became the predominant mode of transportation as science and technology advanced, and the use of Hackneys decreased dramatically. These equines were popularized as show ponies after WWII, which increased their population.

Christopher Wilson was the creator of the Hackney Pony. He bred Fell Pony mares with Sir George, a Hackney stallion born in 1866, and then interbred the offspring to build a set breed of pony. He decided to create a true pony with these features, not a miniature horse. The Hackney ponies vary in height from 12 to 14 hands. The Hackney pony’s head is thin. In general, the head is kept high. The expressive eyes are wide and expressive. The pricked ears are perceptive and acute. These horses have a muscular, slightly arched neck that they proudly show. These horses have a light frame. The Hackney ponies’ backs are compact, and their shoulders are strong. The bones in the legs are solid and well-formed, and the joints are well-formed. They’ve got tough feet. In the Hackney pony breed, the tail is set high. These horses can travel with a lively, smooth, and spectacular gait. Wilson Ponies were first known as Wilson Horses, and they were kept out all year, wintering in the harsh Fells with no food or treatment. The breed’s resilience and stamina were established as a result of this. By the 1880s, the breed had become well-known for its superior trotting performance and elegance. Hackney ponies are also used in the United States to influence American Shetland ponies, improving the breed’s consistency and sophistication. They’ve also been used to enhance the Miniature Horse’s behavior. Hackney ponies come in a variety of colors, including black, bay (which contains brown), and chestnut. Bay is by far the most common color, but black is also popular. Chestnut ponies, on the other hand, are very rare; their color is generally very light, and their manes and tails are always flaxen. Many hackneys have white markings as well. The Hackney Pony may have white markings on its body, legs, and head due to the sabino gene, which is common in the breed. Due to the unpredictability of the sabino gene (possibly a gene complex), breeding exclusively for body white marks can be difficult. Hackney ponies are horses with a reputation for bravery. They can even be abrasive. They are alert and have a lot of agility and stamina. These creatures are also sweet and make excellent companions. Some Hackney ponies are seen in harness in one or two pairs, but classes dedicated to this are uncommon. The Hackney ponies were used to pull carriages during their early years. They are now used as show horses in modern times. Hackney ponies are used for horseback riding. Harness ponies are another use for them. These ponies are also suitable for pleasure riding.