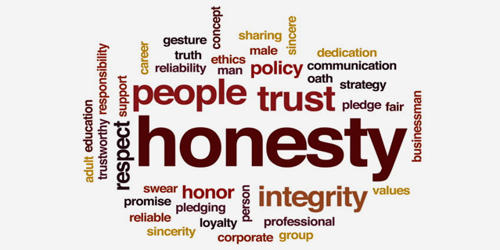 Introduction: The overall activities of an honest man are combinedly known as honesty. It means to develop a practice of speaking truth throughout life. It is a bundle of honest acts that indicate the habit of speaking the truth. Therefore, nothing else pays so much in life as honesty does. An Honest person shows good behavior, always follows rules and regulations, maintain discipline, speak the truth, and is punctual. So, it is such a virtue that makes many really honest to the penny.

How to gain honesty: To gain honesty needs regular practice, well control, a clear thought on a topic, self-determination, etc. An honest person is trustworthy as he always tends to speak the truth. Honesty can be achieved by hearing tales about an honest man, by observing things, by thinking, etc. A man can be honest by coming in touch with honest men. It is a practice which is built slowly and patiently, firstly at home and then school.  But everybody should shun non-sense honesty.

Virtues of honesty: Honesty has many virtues. It brings reward and praise for an honest man. It commands confidence in others. Even an enemy can blindly believe an honest man. Probably, every child learns this teaching from their parents. This beautiful teaching has been taught since time immemorial. Honesty makes a man popular, confident, responsible, trustworthy accountable, etc. A man finds his unique and dignified position in society by virtue of honesty. It is rewarded by Allah, no doubt. It is valuable and it is the habit of utmost importance.

Importance of honesty: Honesty has great importance in man’s life. No other virtue brings such a reward as it does. It leads or lifts a man to the top level. It helps in developing good attributes like kindness, discipline, truthfulness, moral integrity, and more. It is a serious weapon to bring anything under control. A dead enemy bows down his head before honesty. If honesty is not found in anybody, he is not respected and personified by any member of society. The people of the developed countries have also established honesty in their words and deeds. An honest nation has domination over other nations. Lack of honesty in society is doom.

The best example of honesty: There are so many examples of honesty. All the great men like Hazrat Muhammad (sm), Bara Peer Abdul Quader Jhillani, and the preachers of other religions were the men of honesty. They also maintained honesty in all respects and aspects of life even at the cost of their lives. Bara Peer Abdul Quader Jhillani did not hesitate to speak the truth before the gang of robbers while he was on the way to Baghdad. Hazrat Muhammad (am) did never deviate from the path of honesty ever in risking his life Observing the prophet’s true and real honesty all the Arabians believed him blindly in one voice and called him Al-Amin. Not even a single man in Arabia dared call the prophet’s honesty in questions.

The nature of an honest man: An honest man never tells even a lie even out of the fun. He always speaks the truth come what may. An honest individual enjoys enormous respect and status in society. Truth embraces him but falsehood and dishonesty leave him forever. He exhibits honesty in all respects. An honest man may be a humorist but never tells a lie out of humor. His thoughts and ideas always center around honesty. Furthermore, a truthful person can easily generate trust with other people.

The influence of honesty: Honesty has its influence on everything. An honest person is always known for his/her honesty just like a sun is known for its eternal light and unlimited energy. A dishonest person fears an honest man. However, they lose that forever whenever they get caught. To him, an honest man is a terror. It has an invaluable price. An honest man speaks less. It makes a man avoid speaking or telling lies. A robber turned Muslim or became honest following the lofty idealism of Bara Peer Abdul Quader Jhillani. Many men surrendered to the prophet (sm) and became honest following the dictates of the prophet (sm) and his idealism.

Conclusion: The habit of speaking the truth is honesty. The moral ethics of a person is known through Honesty. To talk about a thing exactly is the truth. Everyone should be determined to speak the truth and lead life in an honest way.  It holds good due to its ability to build, shape, and motivate integral values in one’s life. It is a blessing while dishonesty is a curse.