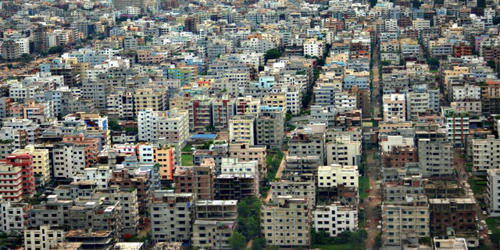 A house is a place where a man lives. A house can be used for other purposes, but usually, housing means to provide dwelling place to men. Housing is one of the basic needs of men. No man can lead a happy and comfortable life without having a house for shelter. Bangladesh is a poor country. A large number of people here do not have any house to take shelter. They live in the slums in the city areas. Some people live by the rail lines, some live under the open sky and some people live on the footpath. There are so many people who live at the rail-stations, at the bus terminals, and at the launch-terminals. They are rootless and shelterless people migrated from the village to the town and cities. They have no shade or roof over their head.

The housing problem is the burning problem for Bangladesh and calls for an immediate solution. The houses made in Bangladesh are different in sizes, designs, and shapes and made by different materials. If all the citizens of the country are not provided with necessary shelter, our efforts for national development will prove futile. Some houses are made of brick, some are made of straw, some are made of tin, some are of wood and some others are of bamboo. Proper planning for housing both in the towns and villages may mitigate this problem.

As many people of our country live from hand to mouth and they cannot keep their body and soul together, they can by no means afford to build a house. There are many landless people who cannot build their houses for want of land. Moreover, every year many houses are damaged by flood, cyclone, and tidal bore. Thus, many people become homeless. A good number of people lose their houses by the erosion of rivers.

Every year natural calamities make thousands of people homeless. For example, Cyclone Sidr in 2007 devasted more than 50 latch houses that made around 3 crore people homeless. Some people need houses to protect themselves from floods and wild animals as well.

The growing population in big cities like Dhaka, Chittagong, Khulna has become a vulnerable issue for housing. So the problems need to be addressed. The problem has become acuter in urban areas. Many middle-class service holders spend their major portion of earnings for accommodation purpose. The number of houses in Bangladesh falls far short of what we actually need. On an average six people live in the house and most of the houses have only one room. It is extremely unhygienic.

Our government is making attempts to solve this problem. The cluster villages in various upazillas built on ‘Khas lands’ have provided dwelling houses to a considerable number of landless and homeless families. In urban areas, an ambitious project to build multistoried buildings to give accommodation to low-income groups is being carried out. In our country, there are developers and many housing companies that are involved with this cooperative housing.

The housing problem is also a burning question. To improve the living standard, the cooperative housing concept may introduce a new era to the people of Bangladesh. The government is undertaking various projects to provide housing facilities in urban areas. The real estate companies should strictly maintain quality. Many houses are being built to provide housing facilities for govt employees. The house building and Finance Corporation as well as many other govt or non-govt. banks and organizations are providing loans for building houses in urban areas. Thus we can make more housing cooperatives- friendly Bangladesh and housing problems will be solved both in urban and rural areas. This program should be expanded in rural areas to ensure housing facilities for the majority of our people living in villages. moans should be provided to them for building a house at minimum interest to mitigate the acute housing problem.