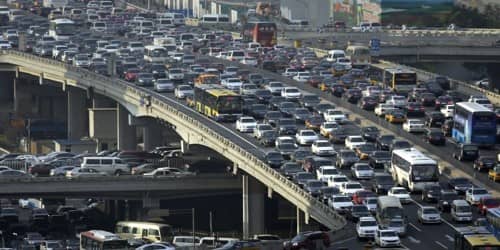 How can we help ease traffic congestions – an Open Speech

How can we help ease traffic congestions – an Open Speech

Traffic congestions or traffic jams on our roads especially on the by ways and expressways are a common sight. Even in housing estates, one encounters traffic congestion or slows down and thus, a trip to the local store located just minutes from the house can take up to half an hour due to this. according to the police, congestion also leads to other problems such as road rage and road bullies in addition to fatal accidents.

There are many ways we can help ease traffic congestions in our country. The main reason contributing to our roads being clogged up is the increasing number of vehicles, especially private ones, on the road. Most families nowadays have at least two cars. Thus, there have to be ongoing campaigns on the benefits of carpooling. Parents can make an effort to drive their children to work rather than helping him or her to purchase a car. Those with school-going children should use school buses rather than sending them on their own. There is always congestion near schools as most parents prefer to send their children for reasons of safety or convenience. Thus, a regulation must be introduced that bans parents sending their children to private vehicles. They should be instead encouraged to use school buses.

The recent hike in petrol prices should be welcomed rather than criticized. Most people are able to afford cars not only because they are cheaper compared to say Thailand but also because petrol prices are relatively low. The increase in petrol prices by 30 cents a liter, however, appears to have little impact in reducing traffic in major cities. Perhaps, the government should increase further the price of petrol to discourage people from spending idle time on the roads.

Another way to help our country overcome traffic problems is to increase the price of vehicles. The recent announcement of a drop in the price of cars would only aggravate the traffic situation in our country. The government should take a cue from our neighbor country and introduce a steep levy on ownership of cars. It should at the same time make public transportation more efficient, effective and affordable. In our neighbor country, cars are very expensive because of the levy imposed on them but the traffic situation is much more manageable. The latter is mainly due to the fact there are fewer cars and most people use the MRT, buses, and cabs which are highly efficient.

It can be a nightmare to be on the road during weekends. Most people either dine out or go shopping during the weekends thus, jamming up the roads. The government should impose a weekend levy or congestion levy on those who use private vehicles during weekends. it would discourage people from using their cars and instead use public transport to arrive at their destinations. This would also indirectly reduce accident rates.

Hence, with the above measures in place, I am sure our country would be able to overcome or at least reduce traffic congestions and accidents on the roads.