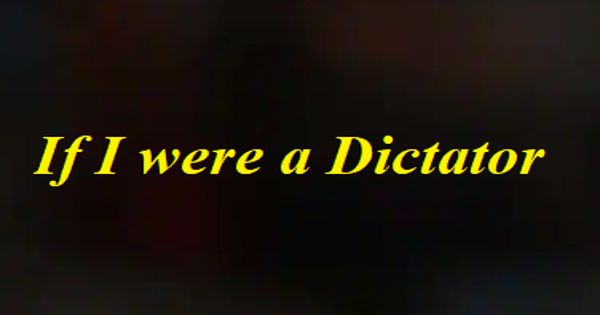 If I Were a Dictator

If I Were a Dictator

It’s a big “if” surely. For there is not much chance of my ever becoming a dictator in our great democratic country. Neither must I say, would I ever wish to be a dictator. Hitler? Mussolini? Stalin? – No! I would not be any of them at any price whatsoever. My mind is fundamentally anti-dictatorial. I do not like even “the dictatorship of the proletariat.”

But, of course, the paper-setter is a dictator himself, and so, at his dictation, whether I like it or not, I have to imagine myself a dictator for an hour or so. If then I were a dictator, real or imaginary, almost the first thing that I would do be to abolish dictatorship. I would establish a democratic government, “broad-based upon the people’s will, but it must be the people’s will in every matter that they must execute. Hence I would see that there were reliable means for ascertaining the people’s will. I would install electric records in every home, and so soon as a problem was posed, e.g., the integrity of the state, or the adoption of one language for a backward or multilingual people – every citizen will, at a fixed hour press his own electrical button and his opinion would be recorded against his number (for every citizen would be given a number). This would be preceded by a week of talks broadcast by the leaders of the people which would help people to reach decisions based on knowledge.

A democracy cannot function without education. Therefore I would at once introduce free compulsory education for all up to the age of eighteen. During this period, the state – In., my state – would bear the entire cost of the education and upbringing of each citizen. I would ensure equal opportunities for all. There would be neither class distinction nor racial discrimination in schools and colleges. Merit would be the only criterion to be taken into consideration.

Here again, I come up with another difficulty. Why will parents spare their children for education, for will they not be wanted to work in the field and help in other ways to maintain the family? But when I am a dictator there will be no one unemployed or in want. Parents will all be sufficiently well off and will not require the help of their children before they complete their education. Hence child labor will not be wanted. The minimum wages for each will be fixed: the maximum will be controlled. On the one hand, I will not allow sweated labor; on the other hand, I will not show any indulgence to the idle or the shirker.

That means I will create a socialist state; to each according to his needs; from each according to his capacity, – that will be my motto. All power to the workers – that will be my slogan. He that will not work, neither wills he eats, – that will be my guiding principle. And then when the ideal is at last achieved, and the golden age finally established, I will voluntarily divest myself of my dictatorial powers. There will be a collective responsibility I will make myself a man of the people. I will be one of the many. so it comes to this, – If I am ever a dictator. I will see that I am not a dictator. After all, having known what had happened to Hitler and Mussolini, I wonder if anyone would ever like to be a dictator.