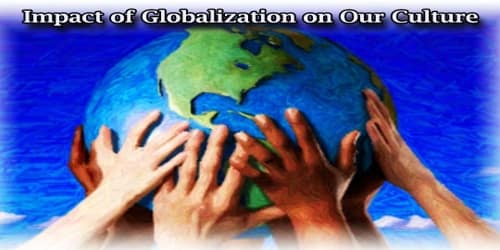 Impact of Globalization on Our Culture

Globalization has become a buzzword in the new era of international relations. It is basically a process that involves free and unrestricted interactions among the different nations of the world as a result of deregulation and improved communication and media channels. In addition, it has a far-reaching effect on many aspects of life. With the development of hi-tech communication, media and rapid transportation facilities, the whole world has squeezed to a large extent and thereby come closer to one another. Now, we can learn in an instant what is happening in the farthest corner of the globe and travel to any country in the shortest possible time. The electronic transfer of information via the Internet has now created an Instantaneous and inter-connected world of information resulting in a 24-hour trading network. Cultural globalization is one of the three main dimensions of globalization commonly found in academic literature, with the two other being economic globalization and political globalization. However, unlike economic and political globalization, cultural globalization has not been the subject of extensive research. With the advancement of globalization, people can know the nature of mutual culture. People can easily exchange their news and views in a convenient way. It helps the people of the countries know one another. This type of mutual relation enables the people of different countries to have a clear idea about one another. They often dare think that they live in the same village. Globalization also brings some negative effects to the nations. The artificiality and emptiness of many other foreign cultures can stand exposed to that case. Sometimes, western culture misguides our youth folk. We can turn this globe into a better place through mutual understanding and cooperation.