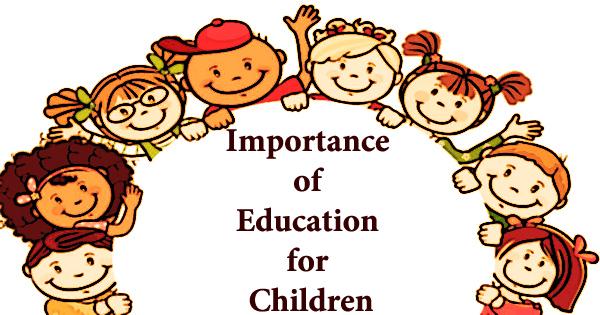 Importance of Education for Children

Education is important in a child’s life because it enables them to think critically and creatively, as well as improve their creativity and thinking processes. This forum introduces them to new concepts and assists them in achieving success in their chosen fields. The quickest way to get out of poverty is to get a good education. That there’s still poverty isn’t the fault of education. It’s just that education isn’t reaching everyone, and certain individuals will need additional assistance. If education is taken away from them, almost all of them will become trapped in a cycle of poverty. Education is so critical in a child’s life that it lays the groundwork for his future success and determines whether he will grow up to be a happy and content adult or an emotionally broken and depressed person. A country that does not invest heavily in child education will still be trapped in poverty and deprivation, not just suffering today but also losing its future. A child is a key to a nation’s success, and education is the key to a child’s success. Only when a child succeeds can the country succeed. Many countries around the world have established ‘The Importance of Education for Children,’ which aims to provide education to children aged 5 to 16. Although parents, politicians, and the general public continue to place a high value on early childhood education, many people mistakenly believe that this crucial time runs from birth to preschool or kindergarten. While the majority of the neurons in the brain grow between birth and three years of age, early childhood education is characterized as the time from birth to eight years of age, which corresponds to the second or third-grade level. Learning skills, cultivating interest and imagination, instilling discipline, developing strength and stamina, communicating, building trust, aspiration, observation, competitiveness, and personality growth are only a few of the goals of education in a child’s life. A well-educated child will shoulder his family’s burdens and rise to a respectable place in society. Children develop self-discipline, a sense of duty, leadership, and teamwork as a result of education, which protects them from social humiliation and child labor. Nearly 70 million children around the world do not have access to education, with 32 million of them living in African countries alone. African countries such as Chad, Central African Republic, Niger, Guinea, Mali, Sudan, and Liberia are among the worst affected. Afghanistan, a country in South-Central Asia, is also among the poorest in the world when it comes to child education. The value of early childhood education cannot be overstated in terms of human growth. The early years of a child’s life lay the groundwork for their future growth, providing a solid basis for lifelong learning and skills, including cognitive and social development. Early childhood education continues to be emphasized as an important building block for a child’s potential success, according to well-established research.

Most childhood education experts agree that young children learn better when they aren’t pushed too hard, have opportunities to engage with their peers, and are treated with kindness by their parents and teachers. Similarly, children perform well when training and educational experiences make up a small part of their daily routine. Education instills in children a sense of teamwork and discipline, which aids in their development as well as the nation’s growth and development in the future. Childhood education teaches and molds a child’s communication skills and assists them in working as a team. A well-educated child recognizes the value of teamwork and demonstrates it in their lives. They discover the benefits and advantages of living a disciplined life, as well as the steps to achieving success and achieving their goals. Education, in the field of foreign affairs and also in our personal lives, creates bridges rather than walls. It also makes us more aware of environmental issues in other parts of the world, as well as how our behaviors affect the lives of those with whom we share the earth. Education is the key to instilling all of a child’s positive attributes so that he grows up to be content, safe, and qualified adult who contributes to the nation’s development while still pursuing success. Education instills in children a sense of teamwork and discipline, which is critical for their own development as well as the nation’s as they mature into adults. A child learns how to communicate and function as a community during his or her childhood education. According to some studies, young children who complete pre-school services are more likely to graduate from high school, attend college, have less behavioral issues and avoid being involved in crime during their teenage and young adult years. Early childhood education builds a child’s mental and emotional resilience, preparing him or her to face potential life challenges. Early childhood education, guided by teachers and parents, can help children become more resilient to life’s challenges and give them the power to fight back. On the other hand, an uneducated and impoverished child lacks the courage to face life’s challenges. Children are the forefathers of a country’s economy, and a country cannot develop economically if its children do not have access to education. A country needs educated children to produce tomorrow’s experts, scientists, and entrepreneurs who will contribute to the economy. Statistics show that countries with higher levels of education have seen greater economic growth in the past and in the present. Although it does not seem to be a personal advantage of schooling, a strong economy benefits all people. Children’s trust is built through education, which is a continuous and continuing process of learning. Education is a continuous process of learning and grasping that increases a child’s attention level. Education dismantles barriers and other types of dominant social evils such as poverty, racism, castism, and other forms of discrimination, paving the way for ideals, morals, imagination, and innovation. Education is also essential for ending child labor and the negative impact it has on a country’s economy and development. Around 150 million children are involved in child labor around the world and do not have access to even primary education. Every child requires education in order to stand out as potential leaders and contribute to the nation’s growth and development.