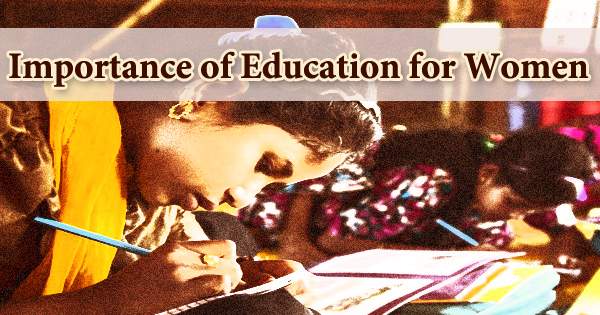 Importance of Education for Women

For both men and women, education is necessary and valuable. It is an extremely important method for success in today’s world. It is important because it is used to mitigate the majority of life’s difficulties. Training provides information that opens doors to a plethora of possibilities for bettering one’s career prospects. Female education is a catch-all word for a diverse collection of issues and controversies concerning education for girls and women (including primary, secondary, and tertiary education, as well as health education). It’s sometimes referred to as “girl’s education” or “women’s education.” Around the world, 65 million girls are out of school, the bulk of whom live in developing and underdeveloped countries. All countries around the world, especially developing and underdeveloped countries must take steps to improve female education because women can play a critical role in a country’s growth. Women’s and girls’ education has a major impact on poverty reduction. Single-sex education and religious education for women, both of which are segregated along gender lines, are more general subjects. In most cultures, women are the primary caregivers for newborn children. During the first three years of life, the infant is more likely to be watched over by a paid nanny, an indulgent grandma, or an older sibling. The baby has more direct contact with women from the womb to its early formative years. The caregiving woman’s words, unspoken messages, and desires have the greatest impact on and decide the child’s future destiny during this period. Improving girls educational levels has been shown to have a positive effect on young women’s health and economic opportunities, which in turn increases the community’s prospects. Infant mortality is half as high in babies whose mothers have completed primary school as it is in infants whose mothers are illiterate. Education for girls has been described as one of the best options for reversing the persistent trend of poverty and disease that is ravaging large parts of Sub-Saharan Africa for over a decade. Not only does ensuring that girls have access to education explicitly boost the viability of the Millennium Development Goals (MDGs) 2 and 3, but it also has a positive effect on the other six Goals. Women are the soul of a society, and how women are handled can be used to determine a society. An educated man goes out to improve society, while an educated woman improves her home and its inhabitants, whether she goes out or stays at home. In a culture, women play several roles: mother, wife, sister, caregiver, nurse, and so on. They have a greater understanding of the social structure and are more compassionate about others’ needs. A well-educated mother will ensure that her children are well-educated, and will value a girl’s education equal to that of a boy.

The importance of women education are briefly summarized below:

A woman’s (and her partner’s and family’s) level of health and health literacy improves with education. Women with higher levels of education and advanced training are more likely to postpone sexual intercourse, first marriage, and first childbirth. Women’s education is also vital for their health, as it increases contraception use while reducing sexually transmitted diseases and expands the services available to women who divorce or are victims of domestic violence. Women’s contact with partners and employers, as well as political engagement rates, increase as a result of education. History is replete with examples of communities that prospered and expanded socially and economically when women were treated similarly to men and were educated. It would be a mistake to neglect women in our efforts to achieve sustainable growth, which can only be accomplished if both genders are given equal opportunities in education and other fields. Women become more self-assured and ambitious as a result of their education; they become more conscious of their rights and are able to speak out against injustice and abuse. A society can’t advance if its women are quietly crying. They must use education as a weapon to carve out a progressive direction for themselves and their families. Women’s education will also prepare them to become political leaders who will campaign for other women’s rights and justice. Women in positions of power, such as politicians and bureaucrats, will more effectively combat discrimination and other crimes against women, resulting in a more equal society. A well-educated woman can make a positive difference in her own home as well as in society. She is more likely to send her children to school, thereby increasing the literacy rate in the country. Aside from improved health and hygiene, increased national economy, and so on, there are several other benefits to educating women. No country will truly grow if its women are left behind in terms of education.