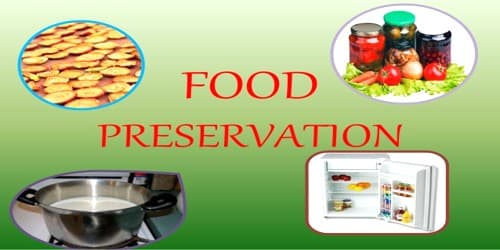 Food is an organic substance once eaten provides the human body with the required energy. Men have preserved their foods from ancient times in order to keep the results of harvesting for winter months, for resale, for storage, and for transporting from sea to inland, overseas, or cross-country. The essence of food preservation is to reduce the number of microorganisms or deactivating their growth. To do so, they generally used nature’s methods, which are drying, parching and fermenting. It is the treatment of food to prolong the time for which they can be kept before spoilage. Direct fermentation of liquids, usually by the introduction of yeast, has not only preserved liquids but also enhanced their quality, the same of course applies to salt. Smoking has preserved and sometimes improved both fish and meat.

Some fermentation and molds are, of course, necessary in the production of food and drink; molds, for example, being used in cheese-making. In ancient times the sun and wind would have naturally dried foods. Modern methods include canning, pasteurization, freezing, irradiation, and the addition of chemicals. There are three basic methods.

Firstly, food may be preserved by cooling or freezing, to a very low temperature when long-term preservation is required. This was originally done by packing in a mixture of salt and ice; today, cold storage is big business and refrigeration is a highly-developed science. ‘Dehydration’ may be bracketed with this method, as the principle involved is the same, namely to suspend the operation of bacteria which requires normal temperatures for a chemical reaction. This is why reconstituted eggs cannot against dehydrated, and melted ice-cream refroze. the second method of destruction is by heat-processes, which destroy all the bacteria present in food and drink. Advances in packaging materials have played an important role in modern food preservation.

Freezing was an obvious preservation method for the appropriate climates.

Food production and supply does not always tally with the demand or meets of the people. Eventually, the method of ‘cold sterilization’ is expected to supersede most of the others; this amounts to exposing the food-stuffs to ionizing radiation. In some places, there is surplus production of a food product, whereas in some other places there is inadequate supply. It is therefore important to improve and expand facilities for storage and preservation of food. Today more than mere food-preservation is sought by the consumer, and for this reason, processes are becoming more and more sophisticated.