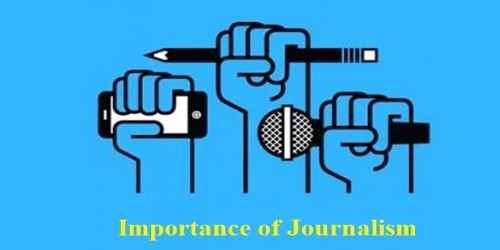 Journalism means the works of a journalist regarding news, views, reports, etc. It is an investigation and reporting of current world affairs which include fashion trends, political or general issue and events to a broad audience. It is apparent writing on any issue of an affair.

Though there are various purposes for it, the most important aspect is the freedom of expression. The root of journalism comes from people’s right to have an opinion.

Today people depend on the press on being informed of what’s happening. A modern newspaper is something very much more than a mere purveyor of the news; it is also a store-house of current information, an instrument of public criticism, a creator of public opinion. The media plays a vital role in a democratic society. Their influence on forming a public opinion is very great. They may be said to do political thoughts on behalf of the man in the street. Then there is the news-editor and his staff. They receive news from different agencies, staff reporters and correspondents. They edit, arrange, and display them. They can flash a headline and create a sensation. The staff-reporters interview people, elicit views by “scooping” news in advance.

Journalism is for the ‘voice of a voiceless’- expressing opinions of all those in our society. It’s like a bridge between the authorities and people. A modern newspaper must also have on its staff competent artists, cartoonists, photographers, etc. There must be advertisement managers and circulation managers. All these people who are on the staff of a newspaper are known by the general name of journalists, or newspapermen.

Wealthy and influential newspapers always maintain their own correspondents, home and abroad. The modern world could not exist without such an elaborate organization and agency of information gathered from various sources.

Therefore its primary purpose is to make sure all citizens are aware of their rights. Journalism is a difficult profession. “To write weekly”, says Virginia Woolf, “to write daily, to write shortly, to write for busy people catching trains in the morning, or for tired people coming home in the evening is a heartbreaking task for men who know good writing from bad. Oscar Wilde once stated, “By giving us the opinion of the uneducated, journalism keeps us in touch with the ignorance of the community”.

Journalism is important to the world because we are now a global economy and almost a global society. A good journalist creates his own peculiar style. He knows the art of creating the taste and demand for what he offers. The most important thing to understand about journalism is that its entire purpose is to serve the citizens. One aspires to literary excellence; another sets greater store by propaganda. Its coverage is very wide, and its scope for improvement is unlimited. But the journalist should guard against the present tendency for trivializing and fragmenting news items, imposing the editor’s opinions upon readers. Finally, journalism provides what Kovatch and Rosenstiel call “a public forum for criticism and comment.” This is an essential thing for a democratic society to have.