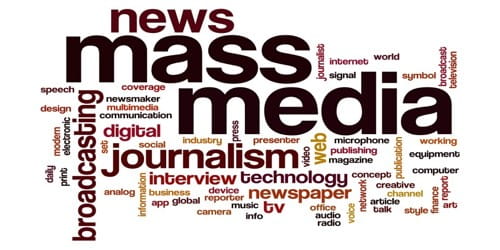 Mass media, according to the dictionary definition, includes the newspaper, television, and radio which are used to communicate with the mass of the people. They play a very important role in organizing public opinion. They are the most frequently and effectively used media devices both for informing the public as a whole and for entertaining people of various classes and ages. It can be used for various purposes: Advocacy, both for business and social concerns.

Mass Media includes various types of media such as television, radio, newspaper, and magazines. What is going on outside countrywide and worldwide must be known by people. Otherwise, their consciousness about the development of science, politics, and civilization as a whole would remain immature. This can include advertising, marketing, propaganda, public relations, and political communication. In today’s world of rapid change and much activity, people need to be kept informed. Reading newspapers and magazines, watching TV, listening to the news on the radio are our main means of getting information.

Another reason why mass media is an essential device is the fact that it is the most effective weapon of the government’s propaganda and circulations. The government tells the nation as well as the whole world about its national and foreign policies through these media.

But in the modern age, the media have not been being used as only a means of informing people. It brings to millions of homes not only entertainment and news but also cultural and educational programs. They have a close connection with entertainment. Various cultural and recreational programs preached through the media are very entertaining to people. Mass media, virtually, have become a part and parcel of our modern life.

Media is one of the most useful hearts of human life. The consequences of this privatization, however, have not only been good, but bad and harmful too. On the one hand, the privatization of the media has increased competition and helped the betterment of the quality of programs and the authenticity of the information, and on the other, it has encouraged the propagation of morally insane programs also.

In modern society, people are influenced by mass media. As far as our native culture and values are concerned, we can aver that the influence of the western media has, to some extent at least, proved to be detrimental to our society. But it is also true that keeping all other things into consideration, we can not expel that influence completely.

The main work of media is to inform the people. We are living in a fast-changing environment. Media is the most powerful tool of communication. Everything old is being removed by the mighty gust of remorseless change. Nothing is possible without media. If we, for relevant reasons, want to survive and advance, we must keep up with the gorgeous procession of change toward amelioration and development.