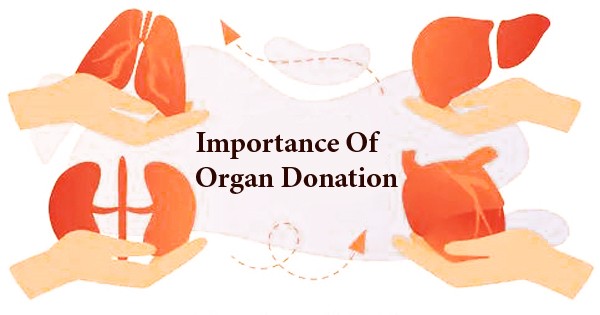 Introduction: In the field of medicine, organ donation is very significant. The organs which are donated help save the lives of people. For the nation, it has proven to be a miracle. For the purpose of transplantation, organs such as the kidneys, heart, eyes, liver, small intestines, bone tissues, skin tissues, and veins are donated. By means of this noble gesture, the donor gives the beneficiary a new life. Life can continue for others because of organ donation. When they are mourning and suffering the loss of a loved one, it is always difficult for loved ones to make such a choice; but death would not be a complete end to their loved one if their organ donation could give life to another human being.

Organ Donation Process: From country to country, the organ donation process varies. The method has been widely divided into two groups, Opt-in and Opt-out. Under the opt-in system, one is proactively required to register for the donation of his or her organs while each person becomes a post-death donor in the opt-out system unless he or she opts-out of it. Regulation of organ donation takes place within the European Union by the Member States. In addition, several European countries have an opt-out scheme in some form. Moreover, Austria, Spain, and Belgium have the most popular opt-out schemes. In England, no permission is implied and a voluntary process is organ donation.

The need for new organs typically occurs when a person loses an organ due to an accident or stops working. Patients with acute liver cirrhosis, for instance, may require a liver transplant. Typically, a liver transplant is achieved by taking a small portion of the liver from the body of a healthy person and transplanting it. In the case of deceased donors, the donor is first confirmed to be dead. Death verification is usually performed by a neurologist several times. If any of his or her organs may be donated, it is then decided. The body is placed on a mechanical ventilator after death to ensure the organs stay in good health. Most organs only function for a few hours outside the body and it is therefore ensured that they enter the recipient immediately after removal.

Licensed organ donors account for about 37 percent of Americans 18 years of age or older. Because of this, the availability of transplantable organs for a steadily growing demand is limited. So, there needs to be a way for that limited supply to increase. Similarly, it is possible to donate organs like the eye’s retina and kidneys. Since extracting them from the patient’s body, these organs remain functional for a few hours. It must be done immediately after extracting it from the deceased person’s body in the case of a heart transplant. However, only when the donor is considered brain dead by doctors will a heart transplant be performed.

Issues of Organ Donation: The ethical status of the underground market organ gift is begging to be proven wrong. While some contend for it others are totally against the idea. It has been seen that the individuals who give their organs are for the most part from the helpless segment of the general public and the individuals who can manage the cost of these are very wealthy. Thus, there is a disparity in trade. Almost all cultures in the world agree that it is ethically acceptable to willingly donate organs. Many scholars agree that after death, everyone should donate their organs. The key question from the point of view of deontological ethics, however, is the controversy on the concepts of life, death, body, and human beings.

In terms of organ donation, various religious groups have different points of view. The Hindu religion does not forbid the donation of organs by individuals. The same vantage point is shared by Buddhists. It is viewed by Catholics as an act of devotion and charity. In their view, it is legally and ethically appropriate. Organ donation is encouraged by the Christian Church, Islam, United Methodists, and Judaism. Gypsies, however, appear to reject it because they believe in the afterlife. The Shintos are also against it as they feel that it is a heinous crime to injure a dead body. If proper support is extended by the government, the organ donation rate can rise. There needs to be a strong political will in order to ensure that the transplant rate rises.

Benefits of Organ Donation: Organ donation is a better option since the immune response, which leads to rejection, is not at risk. For the grieving process, it is really convenient. In addition, because of organ donation, many donor families gain relief and consolation. This is because they realize that their loved one has helped save countless peoples’ lives. Most interesting, up to 8 lives can be saved by a single donor. Organ donation has created unity between the donor’s families and the beneficiaries in society and around the globe. Donating organs may mean the removal of others’ depression and pain. Organ donation, most noteworthy, may also eliminate the reliance on expensive routine treatments.

Organ demand is significantly greater than the number of donors worldwide. Several patients die each year while waiting for donors. Statistics indicate that just 6,000 are obtained in India, compared to an estimated annual demand for 200,000 kidneys. Similarly, the annual average demand for hearts is 50,000, although there are as few as 15 available. For medical science research, organ donation is greatly advantageous. Donated organs provide an exemplary instrument for performing experimental studies and experiments. In order to increase the number of donors, the public needs to be sensitized to the need for organ donation. The government has taken some initiatives through TV and the internet, such as spreading information about the same.

Conclusion: It is important to know whether the organ suits the blood group and body of the patient during transplantation as an organ. It has been shown that organ transplantation has failed on many occasions because the patient’s body has been unable to recognize the donor’s organ. Most countries around the world are suffering from low rates of organ donors. The subject has to be taken more seriously. In order to promote the same, legislation to raise the rate of organ donation must be placed in effect. An extensive understanding of organ donation must definitely be shared among individuals.