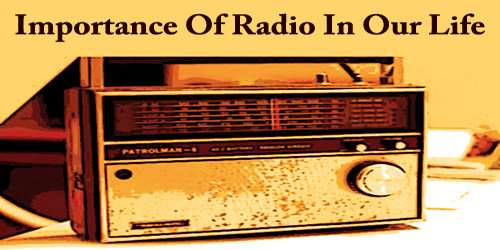 Importance Of Radio In Our Life

Radio is a great and useful invention of modern science. It is a part and parcel of our modern life. It plays a very important role in our life. Radio broadcasts can provide information and entertainment broadcasted 24 hours a day to provide the most recent updates about news or something entertainment related to listeners. When there is no access to the internet, people can still search the airwaves for trustworthy sources. Even electricity is not a necessity for battery operated and hand-cranked radios. It is an easy means of entertainment. Radio is not costly. Any person, rich or poor, can buy it and enjoy its various programs living in any part of the world. It is also a means of communication. Various important items are broadcast on the radio. Different types of government programs are also announced on the radio. As a result, people can be aware of the government’s idea. The warnings of different types are broadcast on the radio too. Many other types of programs are also broadcast on radio. Among them the news is very important to us. Radio broadcasts news at every hour. It also broadcasts weather forecast. People of different occupations can become aware of it. Radio broadcasts various educational programs to educate people. Today sport of different kinds has become very familiar to us because of satellite technology. A radio broadcasts different types of sports commentary. It also government broadcasts various public welfare programs.

Radio has its advantages over other mass media outlets like the television, in terms of being handy, easily accessible and cheap. Nobody wants to carry their television around, so having a radio is the perfect source of portable information and it is accessible at home, in the office or in the car. Basically, the radio is virtually everywhere at any time of the day. There are about 85 thousand villages in our country. A mass medium like radio can play an important role in the media sector. Our technology is not rich. As radio is cheap, it can be bought by almost everybody of our country. It is used as a medium to educate the illiterate people. It broadcasts family planning programs and makes people aware of it. It also broadcasts discussion and information on various fatal diseases like cancer, AIDS, etc. It tells us their causes, effects and their prevention. Thus it makes us conscious of those diseases. An education program is also a favorite program for students. I listen to it regularly. People can be benefited by such type of program. In a word, the radio is very useful to us. It broadcasts various important programs. It is a means of great entertainment as well as communication.