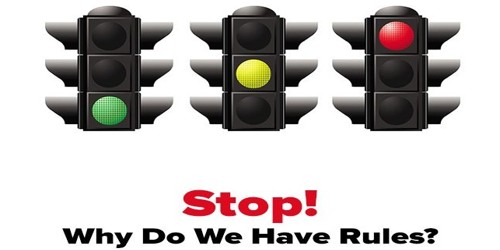 Traffic rules are designed to protect you and other drivers on the road. The government of every country plans some rules and regulations and applies them to the people of that country. Traffic rules are one of them which is to be made for the better transportation system of country. Traffic rules of the roads are both the laws and the informal rules that may have been developed over time to facilitate the orderly and timely flow of traffic. If these rules are to be followed, 99% of road accidents will be finished. It is necessary to have rules everywhere in order to make the functioning smooth and efficient.

As the traffic is increasing day by day in the country, the government is making new roads for a better environment and to avoid such hustle and bustle on the roads. Speeding is defined as the act or an instance of driving, especially a motor vehicle, faster than is allowed by law. Traffics rules are the most important to make the roads free of hustle and bustle the traffic and other things. There are strong direct relationships between the speed at which we drive and the risk of crash involvement and the injuries sustained in a crash result. It is necessary that rules are to be followed by each and every citizen. Rules regulate the work and help it move along the desired path. Every country has its own road safety rules and regulations for the best interests of citizens.

The importance of traffic rules can be observed if we recognize the accidents which took place on a daily basis. It is necessary to have rules for the road, but it is still more important for all of us to follow the set of rules. These accidents take place by the negligence of traffic police and the irresponsibilities of people. The reasons behind these accidents are non-other than the breaking of traffic rules. When we break the rules we are inviting trouble to ourselves and doing no harm to anyone else. These accidents take place as a result of over speeding, signal breaking, overtaking, lack of attention, by using mobile phones. Hence, we should be careful while traveling on the road be it with vehicle or without a vehicle.

Thus, rules must be followed for maintaining discipline on the roads, and above all for our own safety. The only solution to avoid these accidents we should follow the rules which are made for traffic control, only by this we will learn the importance of traffic rules in our life. The rules are there to keep us safe, and following them is in our own interest.