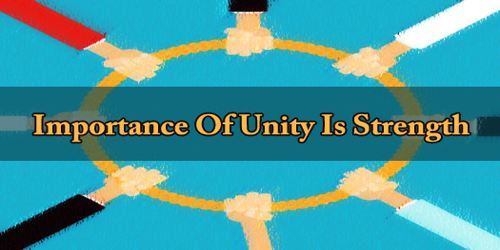 Importance Of Unity Is Strength

Introduction: “Unity is Strength” means unity is the biggest power that can defeat or face any kind of situation or problem existed in this world. We all have heard a lot of stories about the strength of union in our childhood, one of them was about a farmer who had four sons but they always fought against each other.

When a work is done united for obtaining any special goal is called unity. It is a significant feature in human life. Without unity we cannot do a single day. The necessity of unity in human life beggars description. Unity has great value in every walk of life.

Importance: Very few people actually understand the importance of ‘Unity is Strength’ and its application in their lives. But these people that are actually more satisfied as well as content in their lives that actually applies it. It is related to our existence. Therefore, our first and foremost duty is to maintain unity of our life. We cannot do a single day without the help of others. In addition, the help of others depends on unity. Being united, many difficult tasks can easily be done within short time. There are thousands of problems in man’s life. To solve these problems, united effort is essential. Unity helps a nation to reach the goal. Unity is essential to save any country and countrymen.

People nowadays are so blinded by the success and the power that they want to be ahead of their colleagues, relatives, and friends. Thus, they get into professional as well as personal rivalries with each other most of the times so, they do not understand that they cannot move ahead as well as enhance their skills, knowledge, and help each other. Thus, when we go against our team-mates and start to compete with them in an office setting, then people from another team will benefit from the situation.

The results of unity are many. People can enjoy a tension free life living united in the society. It is said that ‘united we stand, divide we fall’. It is true that we can break a single stick easily. On the other hand, to break a bundle of stick is really difficult or impossible. Thus, we can realize the value of unity. It is very significant in trade and commerce. Because, different countries of the world make trade union to lead a good trade among their own. Unity is a powerful weapon to be successful in trade and commerce. It is said that without unity to run trade and commerce is impossible. It is true that to gain any kind of freedom without struggle is not possible. For this, unity is must.

Examples: Various stories are based on this fact about unity and its power, which we have heard in our childhood and now tell those stories to our children. Various examples are taken in those stories related to the power of unity. One is about some pigeons which were trapped in a net by a fowler and when they decided to be united they got success in flying along with the net.

Unity has various examples like a big sea is made of countless single drops, a rope is made of a number of single threads and a huge building consists of various single bricks. These examples show the strength of Unity. Even this whole world is made of uncounted molecules and atoms. Thus we can feel and experience the power of union.

To Societies and Nations: The proverb ‘Unity is Strength’ also holds true when it comes to society and the nation as a whole. The societies and localities where people stay united are loved by everyone. Thus, people living here meets as well as greets their neighbors with a smile, guard their neighbor’s house, help out each other in crisis, etc. Also, they celebrate each and every function together and conducts other social gatherings every now and then. In the current world, many people are suffering from loneliness as well as depression, these types of neighborhood can be a boon.

Similarly, nations around the globe are very busy fighting each other in order to prove that they are better than one another. So, every nation has nuclear weapons and many terrorist organizations have been formed. So, if we stop all these kinds of malpractices than the world will become a much better place to live.

In the time of flood, cyclone, drought, earthquake etc. people suffer a lot. They need help then. To help them united efforts is must. Therefore, to run voluntary activity unity is essential.

Effects: The effects of unity in national life are very significant. Today we can observe the merits of unity among the developed countries in the world. In a word, to live successfully in this world unity is must. There are many bad effects of discord. A nation without unity is considered as a weak nation. A nation cannot stand upright without unity. To be united, personal and national selfishness must be abandoned. For living united, we have to take lesson from the history. In the past, many nation and community ruined due to discord. Unity saves us from thieving, robbery, smuggling, hoarding and mischief.

Conclusion: Unity is the power of any living kind which exists in this world either human beings, birds or animals. The power of unity is the same for all and has different advantages. Each person or other living kind is secure and safe until he is in the group, when they are alone they can be easily troubled or destroyed by anyone. Thus we all should follow this rule to be united and powerful in a manner to handle any circumstance or situation either good or bad. Without unity a country cannot run. Therefore, for the betterment of the country and countrymen, we have to live united.