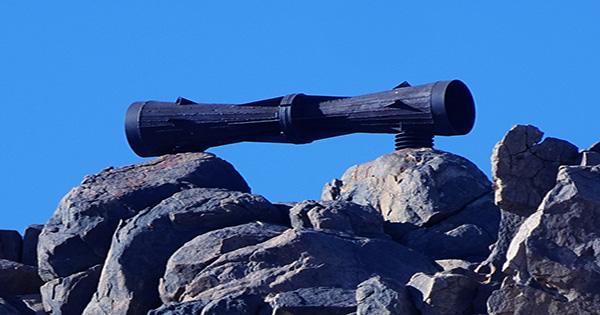 In The Middle Of The Mojave Desert, There’s A Gigantic Megaphone, And Nobody Knows Why

Hello, IFLScience has one more mysterious thing here that has put in an unexpected place. The mysterious Utah monotony of late last year (yes, we’re calling them exclusive even though they’re not rocks, we just refuse to call it a big metallic “thing” as a news agency) took over the world before people got bored of popping up somewhere. Nowhere immediately the answer to that mystery appeared as “art installation” then there are many copyrights.

Frustrated we know, but luckily, there are plenty of other secrets out there to sink your teeth. For example, consider the mystery of why butt plugs invented. Let us take a better example, the mystery of the Mojave Desert megaphone. In the middle of the Mojave Desert, a short distance from the ghost town of California (for extra spokes), on a rocky hilltop you will see a huge rusty “megaphone” swaying with two huge rocks, with a crosshair inside. Rusty megaphones have been sitting around for years, probably for decades. The 8-foot (2.4-meter) long metal cone is complex and requires considerable effort to keep it out of any road access to the desert. Then why try?

No one knows why, although many people put forward their best guesses. Of course, some have suggested it to the aliens (they always do), or some sort of treasure map – the petroglyphs of a mountain at one end of the pipe points have been carved in stone, probably by the people of Chemehuevi hundreds of years ago.

“Mystery sentinel motives are anyone’s guess, but one explanation is that it was related to chemical weapons testing,” Eric Edwards, founder of CampsitePhotos, wrote in a blog post. “Similar experiments were carried out in the 1940s and ’50s in secret and remote areas of the Mojave Desert.” In November 1943, the U.S. Navy set up a test center near the town of Inyokern. With the codename “Project Camel” and in collaboration with the Manhattan Project, the site used to manufacture rocket and aircraft weapons.

As such, it has operated in such a way that the “megaphone” was actually a siren, which used to warn workers to clear any area before running the test. Sara Robbie, a professor of history at Idaho State University, is skeptical. “Early versions of the Cold War almost always had a rectangular face, and the sirens that propelled WW-2 aircraft didn’t actually look better, even those that were more cylindrical,” he told How Stuff Works.

Robbie suggests that this may relate to the experiments conducted here but a measuring instrument, for example, long-range shock wave detection. “But I have some doubts about that.” Therefore, until someone goes ahead, or finds it across the internet, we are in Mojave with the megaphone mystery.