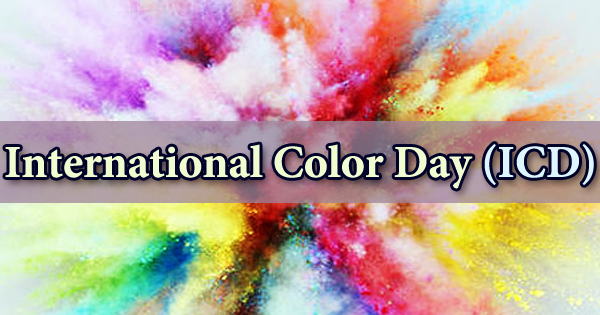 International Color Day (ICD) is observed every year on March 21st to honor all elements of color and their influence on our lives. The day also invites people to consider how color contributes to a better society. The day was chosen since the color is one of the most significant occurrences in people’s lives, as well as one of the channels that contributes the most to the sense of reality, owing to visual perception. During International Color Day, unique color activities are being produced all around the world. Since the dawn of time, color has played an important part in our lives. People have been experimenting with different colors for writing, painting, and expressing themselves for ages. Red ochre is one of the earliest colors known. This pigment was discovered in an ancient cave artwork. The pigment was created with the aid of iron-rich soil. Artists utilized animal fat, burnt charcoal, and chalk to produce various pigments of color as long back as 40,000 years ago. Brown, yellow, black, and white pigments were also developed at this period, in addition to red. The Portuguese Color Association suggested a worldwide day of color in 2008, and its president, Maria Joao Durao, forwarded the proposal to the International Color Association. The idea was approved by the members of this organization in 2009, which is made up of national associations and members from over 30 nations. Because it is the “equinox,” the group agreed on the day. The night and day are roughly equal length around the equinox, metaphorically related to the complementary qualities of light and darkness, light and shadow exhibited in all human cultures. The logo was designed in an international competition, and the winner was revealed during the International Colour Association’s AIC 2012 convention in Taipei, Taiwan. “Two circles create an eye, with an equal half of rainbow hue and black signifying light and darkness, day and night, everyone feast one’s eye on the worldwide color day,” says Hong Kong designer Hosanna Yau.

Humans have the ability to perceive 10 million different colors, according to some experts. However, other individuals believe there are many more colors than that. This is due to the fact that various colors of light have varying effects on color. According to one color specialist, there are 18 decillion colors. If you don’t know how many, it’s 18 followed by 33 zeros. Colors are not only pleasing to the eye, but they also elicit distinct feelings.

White: clean, innocent, and honest A number of activities are held throughout the world on this day. Art exhibitions, design competitions, and workshops on the use of color and light are among the events.