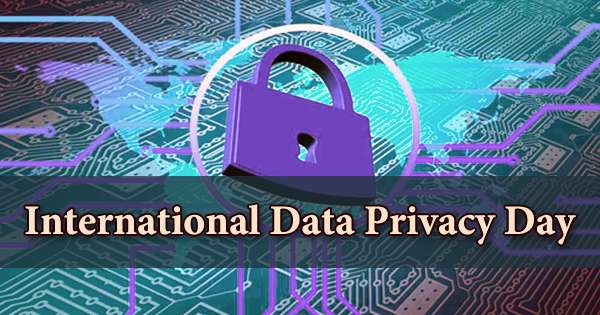 Every year on the 28th of January, “International Data Privacy Day” (also known as “Data Protection Day” in Europe) is commemorated as an international initiative to raise awareness about the importance of privacy and personal data protection. In our digital world, millions of people are unaware of and uninformed about how their personal information is used, stored, and exchanged. The aim of Data Privacy Day is to spark discussion and encourage individuals and businesses to take action. In the United States, Canada, Israel, and 47 European countries, the day is currently observed. International Data Privacy Day raises awareness about the value of privacy, highlights simple ways to protect personal information, and reminds businesses that privacy is good for business. In January 2008, Data Privacy Day was established in the United States and Canada as an extension of the European Data Protection Day celebration. The signing of Convention 108, the first legally binding international treaty dealing with privacy and data security, on January 28, 1981, is commemorated on Data Protection Day. The original goal of the day’s educational initiative was to raise awareness among businesses and users about the importance of protecting their personal information’s privacy online, especially in the context of social networking. Over time, the educational emphasis has shifted to include families, consumers, and businesses. Data Privacy Day supports events and activities that encourage the creation of technology resources that promote individual control over personally identifiable information, encourage compliance with privacy laws and regulations, and build dialogue among stakeholders interested in advancing data security and privacy, in addition to its educational initiative. Governments, businesses, universities, charities, privacy experts, and educators will all work together at the international celebration. Data protection and cybersecurity are more critical than ever before, with the rise of data breaches and cybercrime across the world.

International Data Privacy Day is the centerpiece of a larger campaign to raise privacy awareness and education. The National Cyber Security Alliance (NCSA) is the official leader of the Data Privacy Day initiative, and it is supported by a respected advisory committee of privacy experts to ensure that the campaign is thoughtfully and meaningfully aligned with current privacy concerns. The Council of Europe opened the Convention for the Protection of Individuals with Regard to Automatic Processing of Personal Data for signature on January 28, 1981. This convention is currently being revised to represent new legal problems brought on by technical advancement. The Cybercrime Convention also safeguards the security of data structures and, as a result, cyberspace privacy. Article 8 of the European Convention on Human Rights also protects privacy, including data protection. The European Data Protection Day was first held in 2007 as a result of the Council of Europe’s initiative. Two years later, on January 26, 2009, the United States House of Representatives passed House Resolution HR 31, declaring January 28th as National Data Privacy Day, by a vote of 402–0. The Senate passed Senate Resolution 25 on January 28, 2009, designating January 28th as National Data Privacy Day. In 2010 and 2011, the United States Senate declared Data Privacy Day. Before we can use many apps, we must give them access to personal information such as our location, contacts list, and photo album. Consider who receives the information, and be cautious of apps that demand access to data that isn’t needed or necessary for the services they provide. Delete unused apps from our internet-connected devices and upgrade others to keep them safe. Check the privacy and security settings on websites and applications, and adjust them to our level of comfort for sharing information. Different features will be available on and computer, program, or browser that we use to restrict how and with whom we exchange information. According to a Pew Research Center survey, 79 percent of adults in the United States are concerned with how their data is used by businesses. Respecting customers’ privacy is a smart strategy for building confidence, improving credibility, and expanding a company’s growth. Anti-Phishing Working Group, Carnegie Mellon University, Cyber Data-Risk Managers, EDUCAUSE, Georgetown University, Federal Trade Commission (FTC), Federal Communications Commission (FCC), Federal Bureau of Investigation (FBI), Identity Theft Council, New York State Attorney General Office, the UK Information Commissioner, Data Security Council of India and the Privacy Commissioner of Canada are only a few of the organizations that will be involved in the Data Privacy and Protection Day on January 28, 2016.