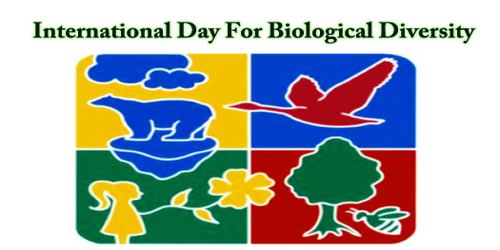 The International Day for Biological Diversity (or World Biodiversity Day) is an observance and not a public holiday. It is a United Nations-sanctioned international day for the promotion of biodiversity issues. It is currently held on May 22. Biological diversity is often understood in terms of the wide variety of plants, animals, and microorganisms, but it also includes genetic differences within each species for example, between varieties of crops and breeds of livestock and the variety of ecosystems (lakes, forest, deserts, agricultural landscapes) that host multiple kinds of interactions among their members (humans, plants, animals). A wide range of events is organized globally to increase the understanding of the important role of biodiversity in our future. Celebrations are organized by the Secretariat of the Convention on Biological Diversity, which forms part of the United Nations Environmental Program; many national governments; and a range of non-governmental organizations. From its creation by the Second Committee of the UN General Assembly in 1993 until 2000, it was held on December 29 to celebrate the day the Convention on Biological Diversity went into effect. On December 20, 2000, the date was shifted to commemorate the adoption of the Convention on May 22, 1992, at the Rio Earth Summit, and partly to avoid the many other holidays that occur in late December.

The Global Report demonstrated the responsibility of human activities in the loss of biodiversity, which amounted to 75% for terrestrial ecosystems. This assessment also indicated that solutions existed and that it was not too late to act. Biological diversity resources are the pillars upon which we build civilizations. Fish provide 20 percent of animal protein to about 3 billion people. Over 80 percent of the human diet is provided by plants. As many as 80 percent of people living in rural areas in developing countries rely on traditional plant‐based medicines for basic healthcare. Each year, the International Day for Biodiversity focuses on a particular theme. Recently, the themes have been: Biodiversity and Poverty Alleviation (2003); Biodiversity: Food, Water and Health for All (2004); Biodiversity: Life Insurance for our Changing World (2005); Protect Biodiversity in Drylands (2006); and Biodiversity and Climate Change (2007); and Biodiversity and Agriculture (2008). Coinciding with the observance of International Day for Biological Diversity, in May 2011 Indonesian Forestry Minister inaugurated the Ciwalen Canopy Trail that is 120 meters (390 ft) long and 60 meters (200 ft) wide at an elevation of 30–40 meters (98–131 ft) above the ground at Gunung Gede Pangrango National Park, West Java, to accommodate five to ten people in one trip. The International Day for Biological Diversity is part of a series of activities to focus attention on the Convention on Biological Diversity. The symbol of this convention is a stylized image of a twig or branch with three green leaves. Depending on the background, the leaves may be just outlines or green blocks. Each year a piece of artwork is commissioned to reflect the theme. Details of the artwork are used as symbols for different aspects of the International Day for Biological Diversity.