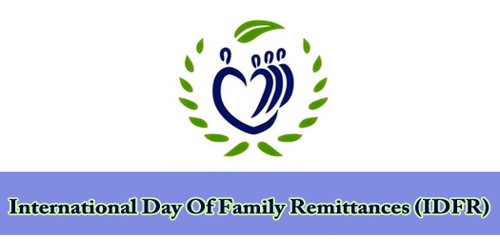 The International Day of Family Remittances (IDFR) is celebrated every year on 16th June. Its main objective is to make known the financial importance that migrant workers contribute to the well-being of their families, and to the work of sustainable development that is created in their country of origin. The day recognizes the contribution of over 200 million migrants to improve the lives of their 800 million family members back home and to create a future of hope for their children. Half of these flows go to rural areas, where poverty and hunger are concentrated, and where remittances count the most. Through this observance, the United Nations aims to bring greater awareness of the impact that these contributions have on millions of households, but also on communities, countries, and entire regions. The Day also calls upon governments, private sector entities, as well as the civil society, to find ways that can maximize the impact of remittances through individual, and/or collective actions. Family remittances are money transfers made by people living abroad to family members in their home country. These transfers have an enormous impact in developing countries as one of the largest financial inflows, competing only with international aid. The UN Governing Council proclaimed 16th June International Day of Family Remittances (IDFR) during a session in Rome in February 2015.