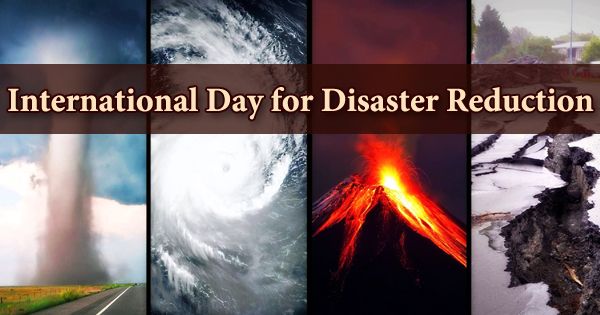 The International Day for Natural Disaster Reduction is not a public holiday, but rather a worldwide commemoration. It began in 1989, in response to a request from the United Nations General Assembly for a day to encourage a global culture of risk management and disaster reduction. The day, which takes place every 13th of October, honors how people and communities all over the world are reducing their vulnerability to disasters and raising awareness about the importance of reducing the risks they face. Natural disasters, such as earthquakes, droughts, tsunamis, heavy flooding, and hurricanes or cyclones, have claimed the lives of many people around the world, as well as their homes and access to critical services such as hospitals. Some countries have suffered economic losses as a result of these disasters. Training, training, and information exchanges, according to the United Nations, are important ways to help citizens become better prepared to withstand natural disasters. The United Nations General Assembly voted in 2009 to make October 13 the official date for this day, as well as to change its name to International Day for Disaster Reduction (IDDR). Every year, millions of people are displaced by sudden-onset disasters. Disasters, many of which are amplified by climate change, have a negative effect on sustainable development investment and results. The International Day for Natural Disaster Reduction is observed every year to raise awareness about the consequences of environmental changes that contribute to disasters. Millions of people are being inspired to speak out about their attempts to recognize this danger, which has resulted in the loss of lives and property. These individuals inspire others to participate in public awareness programs, and a variety of events are planned in honor of International Day to minimize the risk of natural disasters. Various governmental and non-governmental groups launch public awareness campaigns. During the International Decade for Natural Disaster Reduction, 1990-1999, this occurrence was to be commemorated annually. The assembly voted to keep the observance going on December 20, 2001, in order to foster a global culture of natural disaster reduction, including disaster avoidance, mitigation, and preparedness. The day must be commemorated in conjunction with the year’s theme, t-shirts bearing the year’s theme should be distributed to everyone, and small meetings should be held later to discuss people’s disaster management ideas. A good disaster risk mitigation plan, on the other hand, is complicated and necessitates, among other things, effective multistakeholder coordination processes, an overarching national policy, transdisciplinary and multisector cooperation and feedback. One of the most important things that humanity has left is disaster management. Effective preparation is always the best solution to something outside our control, and this is exactly what must be done in the event of both natural and man-made disasters.