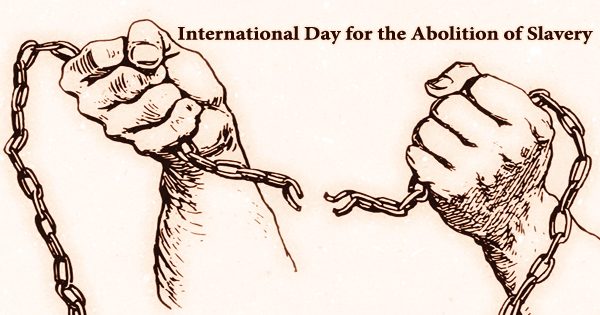 International Day for the Abolition of Slavery

Modern slavery affects more than 40 million people globally, according to the International Labour Organization (ILO). Modern slavery is an umbrella phrase that encompasses activities such as forced labor, debt bondage, forced marriage, and human trafficking, despite the fact that it is not defined by law. It essentially refers to exploitative scenarios in which a person is unable to refuse or leave due to threats, assault, coercion, deception, and/or power abuse. The United Nations (UN) celebrates the International Day for the Abolition of Slavery on December 2 each year to raise awareness about the horrors of modern slavery. It’s not to be confused with another United Nations holiday, the International Day for the Abolition of the Slave Trade. On December 2, 1949, the United Nations General Assembly ratified the Convention for the Suppression of Human Trafficking and the Exploitation of Others’ Prostitution. Besides, by resolution 57/195 of 18 December 2002, the Assembly proclaimed 2004 the International Year to Commemorate the Struggle against Slavery and its Abolition. The purpose of this day is to raise awareness about slavery and to put an end to all types of slavery that exist in today’s world, including human trafficking, sexual exploitation, the worst forms of child labor, forced marriage, and the forced recruitment of children for use in armed conflict. Furthermore, child labor affects more than 150 million children worldwide, accounting for about one out of every ten children. Women and girls are disproportionately affected by forced labor, according to the United Nations, accounting for 99 percent of victims in the commercial sex industry and 58 percent in other industries. The United Nations is dedicated to ending slavery, and bonded labor, forced labor, the worst types of child labor, and human trafficking are all considered modern forms of slavery by the UN. According to some estimates, over a million children are trafficked each year for low-wage labor or sexual exploitation. These types of slavery are global problems and go against article four of the Universal Declaration of Human Rights, which states that “no one shall be held in slavery or servitude; slavery and the slave trade shall be prohibited in all their forms”. Throughout history, slavery has evolved and shown itself in various forms. Some traditional forms of slavery exist today in their original forms, while others have evolved into new forms. The continuation of archaic forms of slavery that are rooted in traditional beliefs and rituals has been documented by UN human rights agencies. Slavery in this form is the outcome of long-standing prejudice against society’s most vulnerable groups, such as low-caste people, tribal minorities, and indigenous peoples. The United Nations General Assembly declared 2004 the International Year to Commemorate the Struggle Against Slavery and its Abolition on December 18, 2002. The International Day for the Commemoration of the 200th Anniversary of the Abolition of the Transatlantic Slave Trade was established by the assembly on November 28, 2006.

On August 23, the UN commemorates the International Day for the Remembrance of the Slave Trade and its Abolition. The majority of today’s child labor is done for the purpose of economic exploitation. This is in violation of the United Nations Convention on the Rights of the Child, which recognizes “the right of the child to be protected from economic exploitation and from performing any work that is likely to be hazardous or to interfere with the child’s education, or to be harmful to the child’s health or physical, mental, spiritual, moral, or social development.” The International Day for the Abolition of Slavery is an observance but not a public holiday. The Protocol to Prevent, Suppress, and Punish Trafficking in Persons, Especially Women and Children, defines trafficking in persons as the recruitment, transportation, transfer, harboring, or receipt of people for the purpose of exploitation using the threat or use of force or other forms of coercion. Others’ prostitution or other types of sexual exploitation, forced labor or services, slavery or practices comparable to slavery, servitude, or organ removal are all examples of exploitation. Many people utilize the International Day for the Abolition of Slavery to express themselves in works such as poetry, opinion pieces, interviews, feature articles, short tales, and other published material. Slavery’s history, evolution, and changes from antiquity to the present day may be discussed in classrooms. Students may also study slavery’s detrimental effects on society. The consent of the person being exploited is irrelevant, and if the person being exploited is a kid, it is a crime even if no force is used. News, discussions, forums, and speeches about modern-day slavery and why it is a serious human right issue are used by online, print, and broadcast media to promote the day. Senators and others with ministerial responsibilities, for example, take the time to urge the people to join them in working to abolish all forms of slavery in modern society. On this day, flyers, posters, brochures, and newsletters promoting the abolition of slavery and the slave trade are distributed across campuses and public locations.