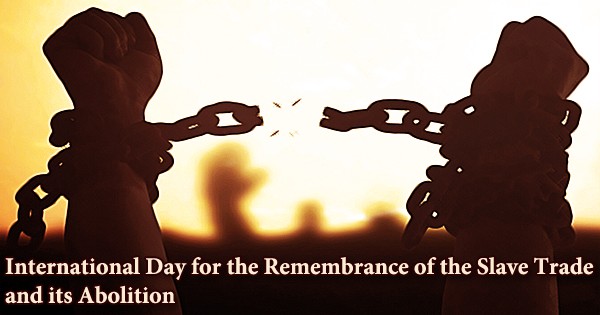 The International Day for the Remembrance of the Slave Trade and its Abolition is marked annually on August 23rd by the United Nations (UN) to remind people of the tragedy of the transatlantic slave trade. It allows people to reflect on the historical origins, techniques, and consequences of the slave trade. It is an annual international commemoration of the transatlantic slave trade on August 23rd, as approved by UNESCO. This International Day is intended to inscribe the tragedy of the slave trade in the memory of all peoples. According to the objectives of the intercultural project “The Slave Route,” it should provide an opportunity for a collective reflection on the historical causes, methods, and consequences of this tragedy, as well as an examination of the interactions that it has spawned between Africa, Europe, the Americas, and the Caribbean. The Director-General of UNESCO urges all Member States’ Ministers of Culture to hold events on that date every year, including their entire population, particularly young people, educators, artists, and intellectuals. The date is notable because on the night of August 22nd to August 23rd, 1791, a rebellion broke out on the island of Saint Domingue (now known as Haiti), setting in motion events that led to the abolition of the transatlantic slave trade. Every year on that date, UNESCO Member States host events in which young people, educators, artists, and intellectuals are invited to participate. Every year, the United Nations asks people from all around the world, including educators, students, and artists, to arrange events centered on the day’s subject. On this day, theatre groups, cultural organizations, musicians, and artists show their opposition to slavery with performances that include song, dance, and drama. Educators celebrate the day by enlightening people about the historical events surrounding the slave trade, as well as the repercussions of slavery, as well as promoting tolerance and human rights. Many groups, including youth organizations, government institutions, and non-governmental organizations, actively participate in the event to raise awareness about the detrimental impacts of the slave trade.

The commencement of the insurrection that would play a significant part in the abolition of the transatlantic slave trade took place in Santo Domingo (now Haiti and the Dominican Republic) on the night of August 22nd and 23rd, 1791. The slave rebellion in the area damaged the colonial system in the Caribbean, prompting an uprising that ultimately to the abolition of slavery and the island’s independence. It marked the beginning of the destruction of the slavery system, the slave trade, and colonialism. The International Day for the Remembrance of the Slave Trade and its Abolition is a UN observance held around the world, although it is not a national holiday. The International Day for the Commemoration and Abolition of the Slave Trade was initially observed in a number of nations, including Haiti (August 23, 1998) and Goree, Senegal (23rd August 1999). Cultural events and debates were also scheduled. The Mulhouse Textile Museum in France took part in the exhibition in 2001 with a workshop producing fabrics called “Indiennes de Traite” (a type of calico) that were used as payment for the exchange of slaves in the seventeenth and eighteenth centuries. The United Nations Educational, Scientific, and Cultural Organization (UNESCO) reminds the international community of the significance of this day every year. This anniversary also honors individuals who worked tirelessly to end the slave trade and slavery all throughout the world. This commitment, as well as the steps taken to combat slavery, had an impact on the human rights movement.