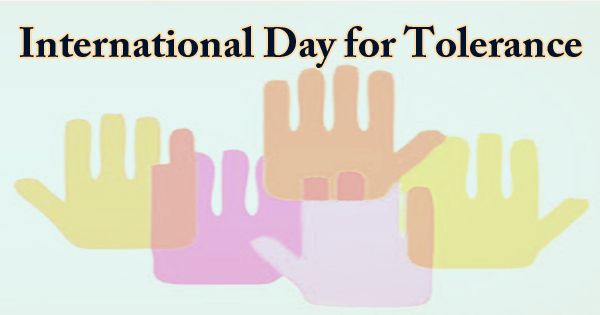 Tolerance is reverence, acceptance, and understanding of the rich diversity, our modes of speech, and ways of being human, of the cultures of our world. It is harmony in difference, the virtue which makes it possible for peace. This implies that one is free to adhere to one’s own values and acknowledge that others adhere to theirs. The fact that everyone has the right to live in peace and to be who they are is acknowledged. The basic human rights and fundamental freedoms of others are remembered through tolerance. People are inherently diverse; in any region of the globe, only tolerance will ensure the survival of mixed cultures. In 1996, the General Assembly of the United Nations invited the Member States to observe the 16th November International Day for Tolerance with events targeted at both educational institutions and the general public (resolution 51/95 of 12th December). This intervention came in the aftermath of the 1995 United Nations Year for Tolerance (resolution 48/126), declared by the Assembly in 1993. The year was announced as an initiative of the General Conference of UNESCO. The Declaration of Principles on Tolerance and the Follow-up Plan of Action for the year was adopted by the UNESCO member states on 16th November 1995. The International Day for Tolerance is an opportunity for people to think about respecting the rights and values of others and acknowledging them. It is also a time of reflection and discussion on intolerance’s negative consequences. On this day there are live discussions and debates around the world, reflecting on how different types of inequality, oppression, prejudice, and unfair discrimination have a negative effect on society.

There is a globalization of the economy in the modern world, a rapid rise in mobility, connectivity, integration, and interdependence, a wide scale of migration and population displacement, in addition to a variety of changing social trends. However, an increase in intolerance and cultural tensions is largely motivated by the environment. Many educators use this day’s theme to help students appreciate topics based on diversity, human rights, and non-violence in classrooms or lecture theatres. In textbooks, lesson materials, and other instructional tools used for this case, these problems are also found. Tolerance articles also appear in the UN Chronicle Online Reading. To raise people’s awareness of the significance of tolerance, information on the day is disseminated through newsletters, posters, news stories and broadcasts, and other promotional content. Other events include essays, dialogues, and story-telling of the personal accounts of intolerance of individuals and how it impacts their lives. In order to raise awareness of the risks of bigotry, abuse, xenophobia, racism, social exclusion or any sort of discrimination or marginalization, and any act of intimidation towards freedom of expression, the International Day for Tolerance is important. This day is often used by human rights advocates as an opportunity to talk about human rights laws, especially with regard to the prohibition and punishment of hate crimes and discrimination against minorities. Special training exercises, talks, or announcements from workplace leaders about the value of tolerance are used on this day in the workplace.