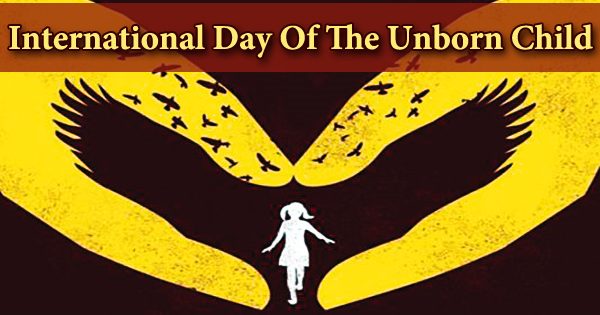 International Day Of The Unborn Child

The Feast of the Annunciation coincides with the International Day of the Unborn Child, which is observed on March 25. It was first commemorated in El Salvador in 1993 when the people commemorated the right to be born. This day honors the unborn children who died as a result of the tragedy of abortion. On March 25, there is an annual commemoration of unborn fetuses, which is marked as a day of opposition to abortion. It was created by Pope John Paul II to coincide with the Annunciation Feast, and it is now recognized in many predominantly Catholic countries. John Paul II viewed the day as “a proactive choice in favor of life and the dissemination of a culture of life to ensure that human dignity is respected in all situations.” To commemorate the day when God was conceived and became an unborn child in the womb of Our Blessed Mother, the Holy Father related this day to the feast of the Annunciation. The Day of the Unborn Child, though commemorated on the same day as the Annunciation, is not solely a Catholic or Christian affair. Any pro-life organization, whether religious or not, is invited and encouraged to attend local events or organize their own to honor human life. This day is commemorated in a variety of ways all over the world. In many churches, people pray the Rosary, attend Mass, or observe a holy hour for the unborn. Some organizations pray for unborn children and spiritually foster them. Many people participate in Rosary processions and marches to abortion clinics. Some hold baby showers to raise money for local pro-life organizations or pregnancy centers. The first official celebration of the weakest and most helpless human beings occurred in 1999, when Argentina’s President proclaimed March 25th the “Day of the Unborn Child,” initiating the first official celebration of the weakest and most vulnerable human beings. Saint Pope John Paul II enthusiastically endorsed the campaign and urged it to be celebrated around the world. This feast has been observed in a variety of forms around the world by churches, pro-life organizations, colleges, and other organizations. Many churches pray the Rosary for the unborn or hold a Mass or Holy Hour for them. Unborn children are religiously adopted by certain groups, who pray for them and their mothers. This day may also be marked by rosary processions or prayerful marches to abortion clinics or government buildings. Some churches host fundraisers, such as a banquet or a baby shower, to benefit local pro-life organizations or crisis pregnancy centers.

Unborn children are often denied the same rights as born children. Their presumed worth and right to life are often linked to the needs and wishes of the mother carrying the infant in her womb. Unborn children, on the other hand, have dignity and value simply because they live and are members of the human family. The Day of the Unborn Child is a day to honor all children who are still alive within their mothers’ wombs, to celebrate their lives, to renew our commitment to protecting them, and to speak out against abortion abuse. The key goal of this gathering is to “STOP ABORTION.” This day began with a different goal in mind, but it is now commemorated to condemn abortions. They understand that abortion is often necessary, but any abortion performed without a medical purpose is illegal. This tradition and belief is opposed by a significant portion of the Christian community. The majority of Christians, Hindus, Muslims, and people of other faiths celebrate this day with joy and zeal. One of the most appealing aspects of this festival is that it prohibits discrimination between religious groups. Nicaragua began observing the Day of the Unborn Child in 2000, the Dominican Republic in 2001, Peru in 2002, Paraguay in 2003, the Philippines in 2004, Honduras in 2005, Ecuador in 2006, and Puerto Rico in 2018. In 2013, Chile started commemorating the Day of the Unborn Child and Adoption. The Knights of Columbus have approved the promotion of the International Day of the Unborn Child. Every child deserves to be exposed to the wonders of the world. People commemorate this day in order to feel the agony of those tortured souls who were victims of such heinous crimes. Their blessings and prayers for those unborn children are sincere and pure.