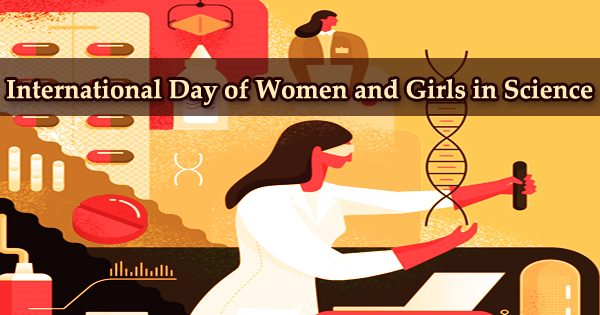 International Day of Women and Girls in Science

By resolution of the United Nations General Assembly on December 22, 2015, the International Day of Women and Girls in Science is observed on February 11th. The resolution received unanimous support from all UN member states, as well as sponsorship from more than 68 countries, demonstrating their commitment to achieving gender equality. UNESCO (United Nations Educational, Scientific and Cultural Organization) and UN-Women (An organization fighting for women empowerment) are organizing the events in partnership with other institutions and civil partners to promote gender equality and women empowerment. The day honors the vital role played by women and girls in science and technology. UNESCO and UN Women organize the International Day of Women and Girls in Science in conjunction with international organizations and organizations, as well as civil society partners, with the goal of promoting women and girls in science. The goal of the day is to encourage women and girls to participate in science on an equal footing. The day aims to raise awareness about the issue by honoring women’s achievements in science and reminding the worldwide community that science and gender equality must work together to resolve key global challenges and meet all of the 2030 Agenda’s goals and targets. The day is commemorated around the world to secure women’s access to science and technology, as well as their engagement, which is critical for gender equality and women’s empowerment. The United Nations’ main objective for attaining gender equality and hence sustainable development is the International Day of Women and Girls in Science. The 11th of February has been designated as a day to honor women and girls who work in science. On December 22, 2015, the United Nations General Assembly enacted A/RES/70/212, which addressed the issue. Later, the United Nations Women, in partnership with civil society partners, UNESCO, and other institutions, accepted the proposal. The COVID-19 pandemic also had a substantial detrimental impact on women scientists, especially those in their early careers, adding to the current gender gap in research and exposing gender inequities in the scientific system, which must be addressed by new policies, projects, and procedures to help women and girls in research.

Young and enthusiastic girls from all over the world who work in the field of science and technology offered their perspectives and presented strategies for achieving gender equality and parity, as well as long-term development. The girls also discussed the barriers that girls and women face in the field of science and technology, as well as possible solutions. They were outspoken about their personal goals and obstacles, as well as those encountered by girls their age around the world. They also shared their thoughts on how to increase associated resources to encourage girls and women to pursue careers in science. The 6th International Day of Women and Girls in Science Assembly will be conducted virtually at the United Nations Headquarters on February 11, 2021. With great momentum and interest to accelerate progress in achieving the 2030 Development Agenda and its 17 Global Goals, the 6th International Day of Women and Girls in Science Assembly theme will be Beyond the Borders: Equality in Science for Society, with a particular emphasis on the importance of social and cultural components in Science, Technology, and Innovation in order to improve sustainable development initiatives. Despite the fact that the international community has made great efforts to include women and girls in science and technology, the majority of girls and women around the world continue to be barred from involvement in these sectors. According to the latest data from the UNESCO Institute of Statistics, women make up fewer than 30% of the world’s researchers. In STEM (Science, Technology, Engineering, and Mathematics), women make a less contributions than men. On December 22, 2015, the United Nations General Assembly determined that an annual commemoration was needed to honor the essential contribution that women and girls play in science and technology. This day has been used to encourage “full and equal access to and involvement in science for women and girls” since then. Women are far less likely than men to participate in high-level scientific meetings, research programs, and other high-level events. Women in science-related sectors are paid less than males and do not advance as far as men, according to studies conducted in a number of nations. Long-standing biases and gender stereotypes discourage girls and women from pursuing careers in science. The world on screen, like the actual world, reflects similar biases. Only 12% of onscreen characters with an identifiable STEM career were women, according to the Geena Davis Institute’s Gender Bias Without Borders report from 2015. The United Nations General Assembly enacted resolution A/RES/70/212 declaring 11th February as the International Day of Women and Girls in Science in order to ensure complete and equal access to and engagement in science for women and girls, as well as to advance gender equality and women’s empowerment.