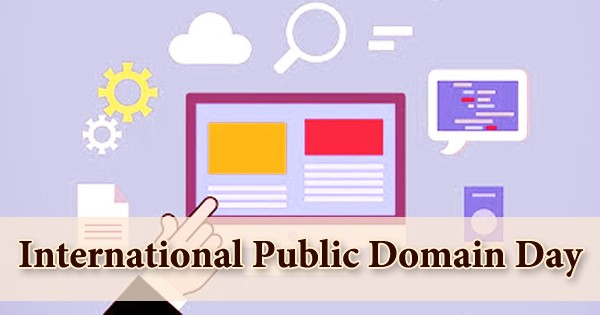 Anything that isn’t protected by copyright falls into the public domain. It’s a repository of creative content that anybody can use and expand upon without having to ask permission or pay a fee. When copyrights expire and works enter the public domain, it’s known as “International Public Domain Day.” Based on the individual copyright laws of each country, this legal transfer of copyright works into the public domain occurs every year on January 1st. Copyright preserves artistic works for a limited time to encourage creativity and enable artists to benefit from their work, but no one creates anything out of thin air. The public domain is both the basis for future innovation and the most basic public library: material that can be accessed and used without any restrictions. Cultural heritage organizations are digitizing and making available a variety of works and collections that are entering the public domain in honor of Public Domain Day. The first recorded mention of a “Public Domain Day” was in 2004 by Wallace McLean (a Canadian public domain activist), with Lawrence Lessig supporting the proposal. Several websites keep track of the writers whose works become public domain on January 1st. Under the banner of Public Domain Day, numerous organizations are organizing events in countries all over the world. Although copyright terms continue to be extended and lawmakers promote a harmful compliance agenda, encouraging work in support of a strong and enlarged public domain has been plentiful.

Efforts to educate the public about the public domain are continuing. The public domain in the United States has been frozen at the year 1922 for the past 20 years. That changed on January 1st, 2019, when works published in the United States were once again released into the public domain. Typically, copyright protection terms are defined as the author’s lifetime plus a certain number of years after death (post mortem auctoris or pma). Copyright usually lasts 70 years pma in many countries, including the United States and the European Union. These works become completely open to the public, allowing everyone to access and use them for any reason without restriction. The public domain continues to be supported by Creative Commons. The CC0 Public Domain Dedication, for example, is a mechanism that allows writers to waive all copyright and associated rights, effectively placing their work in the public domain before the copyright expires. This is a critical method that is used for high-profile projects all over the world. Since public-domain rights vary by jurisdiction, a work’s entry into the public domain is not universal. From 1999 to 2018, no new published works were added to the public domain in the United States. The copyright scheme in Australia is much more stringent, with no new public domain entrances allowed until 2026. Most European countries, as well as Canada and New Zealand, see numerous works enter the public domain each year. It’s unclear when Public Domain Day began (it was listed by Lawrence Lessig in 2004), but it’s been mentioned by Project Gutenberg and supported by Creative Commons in recent years. Public Domain Day celebrations have been held in Poland, Germany, Switzerland, Italy, and Israel on different dates. In reality, more libraries are releasing metadata under CC0, and libraries sharing their data in the public domain may become the standard. Several events were held to commemorate the occasion, including a special section for public domain works at the MIT Libraries and the “Grand Re-Opening of the Public Domain” at the Internet Archive, which was attended by representatives of Creative Commons, the Electronic Frontier Foundation, and the Wikimedia Foundation, as well as scholars such as Pam Samuelson, Lawrence Lessig, and James Boyle.