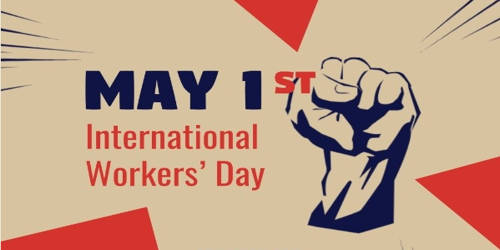 May Day is an international holiday of working people. 1 May is International Workers Day. This Day is a celebration of the social and economic achievements of the international labor movement. It commemorates the historic struggle of working people throughout the world. It is recognized in all the countries of the world. Today all the workers enjoy minimum wage, safety in the workplace and an eight-hour workday. These are the outcome of the struggle of these workers. As a result of the sacrifice of the martyred workers in 1886, today workers enjoy all the privileges. Today they get a minimum wage. They have job security, safety laws and eight-hour working time, etc. These facilities are the outcome of the sacrifice of the workers of Chicago.

International Workers’ Day is the commemoration of the Haymarket Riot in Chicago in 1886. On May 3, 1886, police fired into a crowd of strikers at the McCormick Harvest Machine Company, Chicago. On May 1st, 1886, workers in Canada and the United States held peaceful strikes and rallies to demand an eight-hour workday. They killed at least one striker and five or six others were seriously wounded and left an undetermined number of workers injured. A rally was held in Haymarket Square to protest the killings, and when police tried to forcibly disperse the crowd a bomb was thrown. From the beginning of the Industrial Revolution, people in factories had to work very long shifts, lasting up to fourteen or even more hours a day. In memory of this struggle and the struggle of all workers for better conditions, May 1st was declared a holiday in 1889, by the International Workers’ Congress in Paris for the legal establishment of the 8-hour day, for the class demands of the proletariat, and for universal peace. In the 1880s a new movement calling for an eight hour day inspired both Labour Unions and unorganized workers.

Mayday has been a symbol for workers all over the world. On this day they renew their vow to fight against oppression and for human rights. Due to its status as a celebration of the efforts of workers, May Day is an important official holiday in most of the countries. It is the day that inspires the workers to be united to realize their demands. On the whole, May Day is the day of the international unity of the working class. The spirit of the day is to provide working people with better working conditions and better pay so that they can live happily. This day reminds the workers to stand up against exploitation and to gain better working conditions, better pay and better lives. As workers, we must recognize and commemorate May Day not only for its historical significance but also as a time to organize around issues of vital importance to working-class people today as songwriter Joe Hill wrote in one of his most powerful songs:

Workers of the world, awaken! The rise in all your splendid might Take the wealth that you are making, It belongs to you by right.