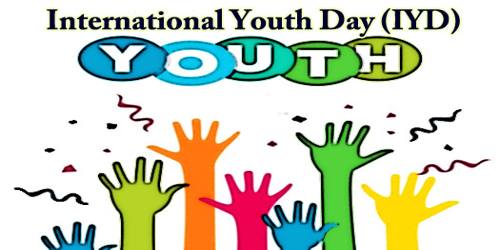 The International Youth Day (IYD) of the United Nations (UN) celebrated every year on 12th August to recognize the efforts of the world’s youth to enhance global society. The aim of the day is to highlight a given collection of cultural and legal issues affecting young people. It also seeks to encourage ways for them to participate more actively in making meaningful contributions to their communities. International Youth Day gives a chance to celebrate and mainstream young peoples’ voices, actions, and initiatives, in addition as their meaningful, universal and equitable engagement. The commemoration will take the form of a podcast-style dialogue hosted by youth for youth, along with individually organized worldwide commemorations that recognize the importance of youth involvement in political, economic, and social life and process. On 17th December 1999, in its resolution 54/120, the United Nations General Assembly endorsed the recommendation made by the World Conference of Ministers Responsible for Youth (Lisbon, 8-12 August 1998) that 12th August be declared International Youth Day. The day is a day of observance by the United Nations but it is not a national holiday. The first International Youth Day was celebrated in the year 2000. One of the highlights of the year was when eight youth and youth-related organizations from Latin America and the Caribbean won UN World Youth Awards in Panama City, Panama.

Youth are often a positive force for development when supplied with the knowledge and opportunities they have to thrive. Today, there are 1.2 billion adolescents aged 15 to 24 years, accounting for 16 percent of the worldwide population. The UN defines the worlds’ youth because the people between 15 and 24 years old, making up one-sixth of the human population. Most of these young men and women live in developing countries and are expected to rise steeply in numbers. The idea for International Youth Day (IYD) was proposed in 1991 by young people who were gathered in Vienna, Austria, for the first session of the UN’s World Youth Forum. The forum proposed that an International Youth Day be proclaimed in cooperation with youth organizations, in particular for fundraising and promotional purposes, to support the UN Youth Fund. Concerts, workshops, cultural events, and meetings that involve national and local government officials and youth organizations all over the world take place during IYD. Rising Youth Day is associated with a variety of worldwide events.