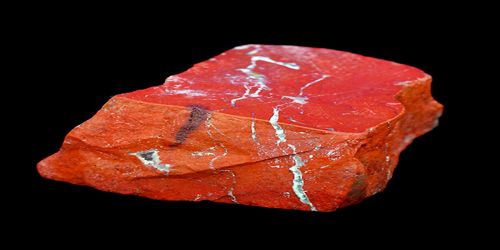 Jasper, an aggregate of microgranular quartz and/or chalcedony and other mineral phases. It is an opaque reddish-brown semi-precious stone consisting of a variety of chalcedony. The ancient Egyptians wore Jasper scarabs as amulets, as this stone was believed to increase sexual energy.

It is a kind of fine hard porcelain developed by Josiah Wedgwood and used for Wedgwood cameos and other delicate work. According to the Bible, it was a direct gift from God and would be the first foundation stone of the New Jerusalem. It is an opaque, impure variety of silica, usually red, yellow, brown or green in color; and rarely blue. The common red color is due to iron(III) inclusions. The mineral aggregate breaks with a smooth surface and is used for ornamentation or as a gemstone. It can be highly polished and is used for items such as vases, seals, and snuff boxes. The specific gravity of Jasper is typically 2.5 to 2.9. A green variety with red spots, known as heliotrope (bloodstone), is one of the traditional birthstones for March.

Green Jasper was used to making bow drills in Mehrgarh between 4th and 5th millennium BC. Jasper is known to have been a favorite gem in the ancient world; its name can be traced back to Arabic, Azerbaijani, Persian, Hebrew, Assyrian, Greek, and Latin.

Although the term jasper is now restricted to opaque quartz, the ancient iaspis was a stone of considerable translucency including nephrite. The Jasper of antiquity was in many cases distinctly green, for it is often compared to the emerald and other green objects.

The Jasper of the ancients probably included stones which would now be classed as chalcedony, and the emerald-like jasper may have been akin to the modern chrysoprase. The Hebrew word may have designated a green jasper.