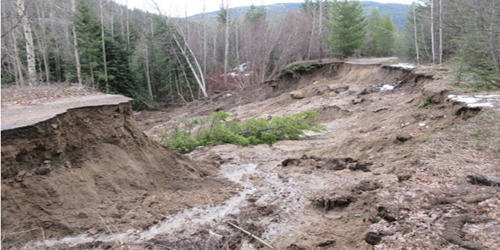 The landslide occurred at 6 a.m. just as we were getting ready for school. We heard a loud rumbling sound coming from the direction of the hill slopes. Although we rushed to the balcony of our apartment on the tenth floor, we could not see anything. The whole area was enveloped in bleak darkness. I knew that the heavy rain during the past week must have taken its toll on the hill slopes. I pushed the thought to the back of my mind and went about having my breakfast.

By the time we got ready for school, Dad called out to us. We rushed to the balcony where Dad was standing. The sun was already up and in the dazzling brightness, we could see boulders the size of bulldozers resting at the foot of the slopes. A neighbor informed us that a major landslide had occurred. We rushed to the basement. We saw that rescue workers were already there and were removing buried vehicles from the rubble. The landslide had also cut off the only road to town.

Office workers and schoolchildren were left stranded. We were not allowed to go anywhere near the area where the rescue work was in progress. We could not do anything but stand and watch helplessly. There was also a power failure which meant that we had to suffer the heat and on top of it, could not watch television.

During the initial stages, we were told that the residents from the two apartment blocks may have to be evacuated. This caused residents a great deal of anxiety. Later, when the police, firemen, and various authorities met, they decided against the evacuation. Everyone was relieved.

We spent the whole day just watching the rescue workers at work. We prayed silently that the whole episode would soon be over. We were told to go back to our apartments and remain there until further notice. Later that night, we were told that the access road had been cleared and that there were no casualties or massive damage to property. We all heaved sighs of relief when we heard this. Mum led us in saying a thanksgiving prayer. We had a lot to be thankful for. As I got ready to go to bed that night, I recollected the events that occurred that day. I was glad the day had come to an end.