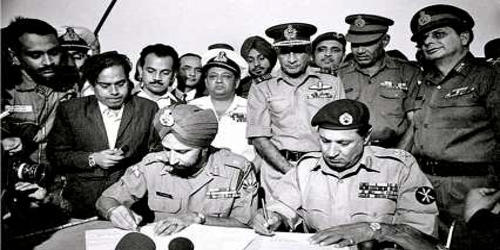 The 1971 liberation war of Bangladesh against Pakistan continues shaping the mindset of Bangladeshi people until the present day. Our War of Liberation is an important event in the history of the nation. We achieved our independence through this Liberation War. This bloodstained historical event has constructed a Bangladeshi sense of nationalism and has forged its contemporary Constitution. To achieve this independence, millions of martyr’s indents nations after this bloody war. The Bangladesh we see today is essentially the fruit of the liberation war of 1971. The War continued for nine months, sacrificed their lives, with a smiling face. Bangladesh came into being as an independent nation after this bloody war. The ware continued for nine months.

The liberation war of Bangladesh was not merely a war for independence fought by Bangladeshi nationalists – one of its main triggers was religion. When a general election in the then Pakistan was held, Awami League won a landslide victory and secured 278 seats in the national assembly. But the President of the then Pakistan, General Yahia Khan denied to hand over power to Awami League. The Pakistani government wanted to turn Bangladeshis into exemplary Muslims by alienating them from their Hindu background. Sheikh Mujib, as the chief of Awami League, called for non-violent and non-co-operation movement in protest of President’s denial of hangover power.

On the 7th March 1971, Seikh Mujib, in a mammoth gathering at Ramna Racecourse (At present Sohrawardi Udyan) made a clarion call to raise a protest and resist the Pakistani regime. While a lot of Bengalis joined the guerrilla force favoring independence, many others, particularly women and children, fled the country and took refuge in the closest neighboring country – India. Mujib instructed the people to make preparation for fighting against the Pakistani army in order to achieve independence. The Pak military launched an unpreceded attack on the civilians of Bangladesh on the night of the 25th March 1971. The War of Liberation began on the 26th of March. The students, the youths, and people from all walks of life launched a strong resistance to the enemy force.

Pak military forces killed thousands of innocent men, women, and children, ransacked innumerable houses and looted their belongings. They set to fire shops, bazaars, schools, colleges, and destroyed roads, bridges. They also disrupted railways, waterways, and airways. After Pakistan launched several attacks on Indian territory on the 3rd of December 1971, India joined Bangladesh in its military efforts against the Pakistani military. Pak army continued their reign of occupation and atrocities all over Bangladesh until At last, they surrendered to the allied forces of Mukti Bahini and the Indian army. With the support of India as well as commands from the military officers of East-Pakistan, the West-Pakistani military was defeated. It eventually surrendered to the joint forces of Bangladesh and India leading to victory for Bangladesh on the 16th of December 1971.

When the people heard the news of the surrender, people of all walks of life burst out into joy and ecstasy and flocked to the roads. After nine months of confinement, panic, and tension, people came out of their houses under the vast, blue sky to celebrate the freedom and express their feelings of merriment. People came out in processions enchanting slogans. It was not easy for the common people to fight against the trained armies of Pakistan. They fought for nine-month and after nine-month, we gained our liberation.

Thus, the 16th of December is the day of victory, day of inspiration, and the day for oath-taking to defend freedom at any cost.  Now we are a free nation. We remember the freedom fighter with great respect.