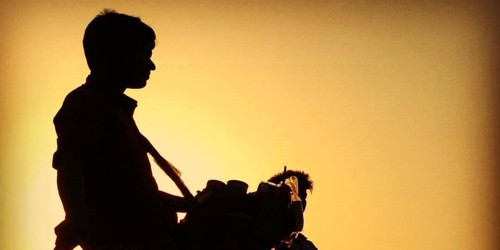 Life of a Street Hawker

Life of a Street Hawker

A street hawker is a person who sells various things by moving from street to street. He is a self-employed person. A person who sells various things moving from street to street is called a street hawker. He is the most familiar figure in the cities and towns. In a village, he is also seen. He wears a peculiar dress of different colors and makes a peculiar sound to draw the attention of his customers. His work is tiresome. He carries his materials on the head, sometimes in hand; sometimes in a bag and sometimes in a small handcart. He generally buys his goods at a cheaper rate and sells them at a good profit. His goods are mainly attracted to women and children. He usually sells toys, cosmetics, ready-made garments, utensils, sweets, ribbons, fruits, etc. They began their day quite early and go to the wholesale market to buy stuff to sell throughout the day.

Generally, in the absence of the housemaster, he comes to sell his goods. He adopts different techniques to convince his customers. He sells things at a cheaper rate than that of permanent shopkeepers.  He claims that his products are the best in quality. As children are his good customers, he maintains good communication with them. He is a favorite man of the children. His toys are innocent things but the cheap food he sells is often harmful. He sells uncovered food. This spread diseases.

However, although a street hawker works, hard, he does not earn much. A street hawker’s life is not easy and comfortable but it is rather difficult and full of hardship. He has a very small capital and earns little. Their working conditions are sometimes not even hygienic. They have to keep standing in dust and dirt. So he maintains his family with great hardship. He cannot maintain his family with this little income. In fact, his life is made up of suffering, hard labor and want. We should respect him because he earns his living by the sweat of his brow. The Government must make efforts to provide him proper work conditions.