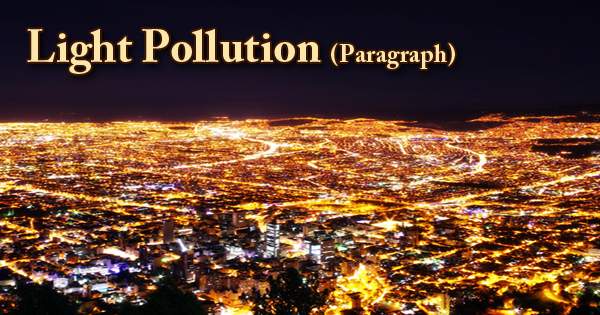 Light pollution is a form of pollution; it is the “inappropriate or excessive use of glare, sky glow, and light trespass by light causing light.” There are implications of too much light pollution: it washes out starlight in the night sky, interferes with astronomical research, disrupts wildlife, has negative health effects, and wastes energy. Light pollution badly affects many animals, including plants and humans. Many people have never heard about light pollution, even those who do not normally think about it or do anything about it. Every year, light pollution costs Americans billions of dollars. Light pollution presents a significant threat to nocturnal wildlife, in particular, having a detrimental effect on plant and animal physiology while disturbing habitats. It may confuse animal migration patterns; alter animal competitive interactions; alter relationships between predator and prey; and cause physiological harm. The natural regular cycles of light and dark orchestrate the rhythm of life, so disruption to these patterns affects the dynamics of ecology. Too much light in the night sky washes out starlight, which creates several issues on Earth. Light pollution is an environmental epidemic that is quickly advancing, causing everyone to worry. The growth of the population of cities, as well as the types of buildings being built, such as outdoor sports stadiums and billboards, has increased over the years.

Skyglow is the sort of light pollution that prevents stars and other deep-space phenomena from being seen by individuals. This causes birds to be unable to migrate to the right location because the moon and stars cannot be followed. SkyGlow also prevents faint stars from being seen by astronomers. Light pollution’s most common consequence is that it interferes with biological processes and activities. We disturb our own and other species’ sleep cycles with all our artificial light. For nocturnal species that wake up at sundown, this is primarily a major issue. Many organisms, especially humans, are dependent on natural body cycles called circadian rhythms and melatonin production, which are regulated by light and dark body cycles (e.g., day and night). Melatonin development can be suppressed if humans are exposed to light while sleeping. This can lead to sleep disturbances and other health issues such as increased headaches, worker fatigue, medically identified stress, lack of sleep, and increased anxiety due to certain types of obesity. And there are similarities to a couple of cancer forms. The effects of glare on aged eyes are also present. The health effects are caused not only by over-illumination or prolonged light exposure over time but also by inappropriate light spectral composition. In major cities, light pollution is most common, but in suburban areas, around airports or large sporting event facilities, and along highways where illuminated billboards and streetlamps are common, it may also have an effect. Light pollution is more annoying for humans than an environmental problem, which can make it difficult to see stars or interfere with sleep. Light pollution, however, may be more obtrusive for animals, disrupting biological clocks, impacting natural predation patterns, and overall threatening animal environments situated close to highly illuminated signs of human society. It will be one of the most successful solutions to shine lights down rather than upon the streets. There are some organizations now working to avoid light pollution.