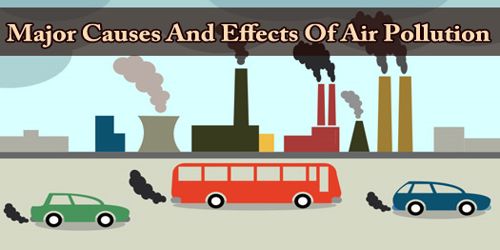 Introduction: Air pollution is the occurrence or addition of foreign particles, gases, and other pollutants into the air which have an adverse effect on human beings, animals, vegetation, buildings, etc. The fossil fuel, firewood, and other things that we burn produce oxides of carbons which got released into the atmosphere. Earlier there happens to be a large number of trees that can easily filter the air we breathe in. But with the increase in demand for land, the people started cutting down of trees which caused deforestation. That ultimately reduced the filtering capacity of the tree.

Causes Of Air Pollution: Its causes include burning of fossil fuel and firewood, smoke released from factories, volcanic eruptions, forest fires, bombardment, asteroids, CFCs (Chlorofluorocarbons), carbon oxides and many more. There are different kinds of reasons of air pollution.

The causes of air pollution are described below:

The greenhouse effect is also the cause of air pollution because air pollution produces the gases that greenhouse involves. Besides, it increases the temperature of the earth’s surface so much that the polar caps are melting and most of the UV rays are easily penetrating the surface of the earth.

Conclusion: However, it is the right time to protect air pollution. Although the level of air pollution has reached a critical point. But, there are still ways by which we can reduce the number of air pollutants from the air. To create a better place to live in for the human being and wilderness we have to stop air pollution.