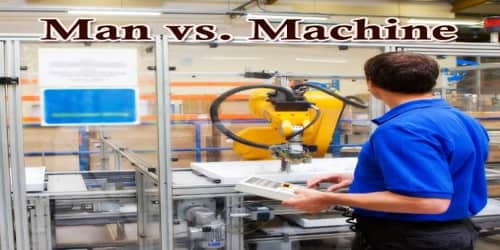 Introduction: Human beings and machines work differently. We all know machines are the creation of Human. Machines were created to make human life easier. Humans highly depend on machines and there is a new revolution. A machine is only a motorized gadget consisting of different parts. Machines perform different functions but do not have a life like humans.

After the industrial revolution man has developed and progressed rapidly. Machines and modern technology have given him comfort, facilities, and leisure in life. From simple calculations to mass production of things everything we need in today’s fast-paced life is assisted by machines.

Machines are a Creation of Mankind: Humans are created of flesh and blood, they have a life. Humans have emotions and feelings; they express different emotions at different times. Machines are mechanical and they work with their mechanical brain which is programmed by humans. Humans understand the situation and respond accordingly whereas machines do not have the capability of understanding. Humans are creative and imaginative.

Humans can create and invent new things but machines cannot. Machines are operated and guided by humans. Humans are blessed with intelligence and emotions while machines have artificial intelligence. Humans have diverse abilities at several things including language abilities, pattern recognition, and creative thinking. When it comes to socializing, data analysis or having opinions humans are certainly ahead of the machines.

Man vs. Machine: Which is better?

The products are finely made with the help of machines and have a better finish compared to human-made products. Machines can manufacture things in larger quantities compared to man and at greater speed. Whether it is clothing, footwear or jewelry, everything produced by machines has a good finish.

Artificial Intelligence (AI) not only save a lot of time and energy but is also a medium of entertainment for man. Today man cannot imagine his life without smartphones, laptops, music systems, television sets, washing machines, and other such equipment. Humans and machines are not competitors, but humans collaborate with machines for more productivity, speed, and accuracy. From communication to traveling everything has become simple and speedy. Mans seeks the help of the machines for all the activities he does. There are countless uses of machines. Machines are responsible for rapid development in the present-day world.

However, we must not forget that machines are a creation of man. So, surely man is superior to machines. He has become handicapped in a way as physically he has become less active and is dependent on machines. Man is a greedy animal who wants more and more. Even though machines have made the life of man easy, he has no time and patience to live a peaceful life.

The beginning, the end?

Some of the most intelligent people in the world have warned us about the development of AI (Artificial Intelligence) and what it means for humanity. Recently, Stephen Hawking, Bill Gates, and Elon Musk have warned that the development and creation of AI have the potential to bring about the destruction of the human race through the creation of super-intelligent machines that will see no use for us.