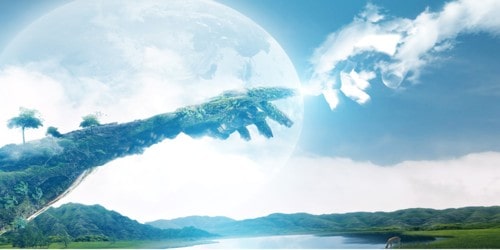 Human beings live in the realm of nature, they are constantly surrounded by it and interact with it. The modern scientific revolution has certainly enabled man to make enormous strides in harnessing Nature’s power and potential for his own purposes. Man is constantly aware of the influence of nature in the form of the air he breathes, the water he drinks, the food he eats, and the flow of energy and information. Yet, he should be careful not to assume too easily that final and complete control is only a matter of time.

Before the days of freedom of thought and research, progress was held up by ignorance and superstition. Early cosmologies pronounced the earth flat, the fixed center of the universe. Religion especially Judaism and medieval Christianity rooted in Jewish concepts taught this cosmology as a religious fact and banned all scientific research based on independent thought.

But whatever knowledge was groped after the Renaissance, such knowledge had virtually no practical application, until the 18th century in Britain, which marked the beginning of the scientific revolution. This was because there was virtually no such thing as systematic scientific research. From times up to Watt’s steam engine, applied science was almost non-existent.

The more man probes nature’s laws, the more he seems to control nature. He can defend himself by using modern weapons, guns, bombs or missiles. He can ride the earth’s surface by car, rail, bicycle, and ship; he can search the sea’s bottom by using diving gear or sail beneath the surface for months on end in submarines. He can fly over it in jet aircraft high over the earth’s atmosphere. He can photograph the moon from a few kilometers range and transmit the pictures instantaneously to earth. We have seen him land on the moon. He can move and till the earth with giant machines. He can defeat disease by antibiotics and prolong his life by observing scientific health-rules. He can use natural products as never before; timber for his daily newsprint; coal and oil for his machines; waterfalls for his hydro-electric plant; steel and concrete for his buildings; nuclear power to produce his electricity.

There seems to be no end to it all, and it is easy to assume that man will soon master the world and eventually the universe. Science may probe space, but it cannot defeat the laws of time and motion. there is no foreseeable way in which man could ever venture beyond Mars; Medicine had advanced, but we still suffer from the common cold. The psychiatrist can diagnose a psychopath, but cannot cure him.

It seems the giant intelligence we call God has said ‘thus far and no further’. And the facts of man’s moral nature give no cause for optimism. The truth seems to be that man has not and never will master nature. It is nature that gently tolerates man.