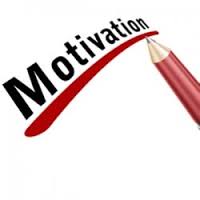 Motivation is a term that refers to a process that elicits, controls, and sustains certain behaviors. For instance: An individual has not eaten, he or she feels hungry, as a response he or she eats and diminishes feelings of hunger. According to various theories, motivation may be rooted in a basic need to minimize physical pain and maximize pleasure, or it may include specific needs such as eating and resting, or a desired object, goal, state of being, ideal, or it may be attributed to less-apparent reasons such as altruism, selfishness, morality, or avoiding mortality. Conceptually, motivation should not be confused with either volition or optimism. Motivation is related to, but distinct from, emotion.

Intrinsic motivation refers to motivation that is driven by an interest or enjoyment in the task itself, and exists within the individual rather than relying on any external pressure. Intrinsic Motivation is based on taking pleasure in an activity rather working towards an external reward. Intrinsic motivation has been studied by social and educational psychologists since the early 1970s.

Different types of motivation are frequently described as being either extrinsic or intrinsic. Extrinsic motivations are those that arise from outside of the individual and often involve rewards such as trophies, money, social recognition or praise. Intrinsic motivations are those that arise from within the individual, such as doing a complicated cross-word puzzle purely for the personal gratification of solving a problem.

Internal and external factors that stimulate desire and energy in people to be continually interested in and committed to a job, role, or subject, and to exert persistent effort in attaining a goal.

“The only way to get people to like working hard is to motivate them. Today, people must understand why they’re working hard. Every individual in an organization is motivated by something different.”

Managers find many ways to motivate their employees, so they desire to perform to the best of their abilities. Financial rewards and incentives are common in the business world today; although, most experts agree money is not the best motivator because the motivational effect of most financial rewards does not last. According to Donna Deeprose (1994), “For one thing, while the presence of money may not be a very good motivator, the absence of it is a strong demotivator”. Therefore, financial rewards are an absolutely necessary base to successful motivate a company’s workers. The most common types of financial rewards that will be discussed in this paper are salary increases, profit sharing, incentive travel, and paid time-off.

As has been mentioned, the absence of salary increases or bonuses can be a strong de- motivator, primarily because people use money as a scorecard to measure their achievement. Money is also an indicator to the person of how important he or she is perceived to be within the organization. The absence of salary increases or bonuses to some employees would indicate that they are not valued within the organization.

The economy has been in a constant decline for the last few years. As the economy Continues to suffer, companies are facing the challenges of giving raises or bonuses. In recent years, most employees are willing to give up a raise if it means they could avoid being laid-off. In a year when money is not available for bonuses and raises, companies can make wise use of recognition programs and team rewards. “But companies cannot adopt a ‘products only’ policy for long. Experts say one year is the limit” If employees go for more than one year without receiving a raise or a bonus, their productivity is likely to decline, and valuable employees may be tempted to look for other employment, which can be costly in rehiring expenses.

Performs better in a given month in the current year compared to the previous year. This type of profit sharing program provides immediate benefit and rewards for employees. When compensation is tied to performance, companies realize the benefit in the following way:

“Financial rewards are also an effective motivator, and further, have the added advantage of being a ‘need’ that is generally never satisfied. Linking ‘people working smarter’ with some equitable reward system serves to reinforce the motivational process. ‘Gain-sharing’ is an effective reward system capitalizing on both aspects.” Profit sharing/bonus programs have the dual effect of motivating employees to be more productive and to cut costs. The second most common type of profit sharing is rewarding with stock; and as the company does better, the value of the its stock increases in value. According to Bob Nelson (1997), “One of the highest forms of recognition is to treat an employee as if he or she is an owner of the company. This represents a long-term commitment to the individual.” Stock is usually reserved to motivate high- level managers or key people within most corporations, and a couple of reasons exist for this trend. First, if managers are motivated by a profit-sharing program, they will make decisions that will benefit the corporation long term.

Incentive travel Who would say no to an all-expenses paid luxury holiday? Another Effective way to financially motivate employees is with incentive travel. Many times when employees are rewarded with cash bonuses or pay raises, the money is used to pay off debt or everyday types of financial expenses. While money for everyday expenses is good, the added appeal of incentive travel, as a bonus or reward, is that employees would probably never buy something like it for themselves.

Paid time-off Paid time away from work is one of the most common types of financial Rewards used to motivate employees. The amount of paid time-off can vary from an extended lunch to multiple days off at the same time. Bob Nelson (1997) suggests how this can be done effectively, “If the job permits it, simply give people a task and a deadline and specify the quality you expect. If they finish before the deadline, the extra time is their reward”

This report speaks of emotive forces as internal emotional drives for performing a task. Effective motivation of employees goes beyond the financial compensation for work, and some of the most well-known companies in the world have realized the benefits of appealing to their employees’ drive to work intelligently and to be recognized. Most motivators lead directly to the empowerment and enabling of people to perform well. Productivity can be improved when a company focuses on the following: goal setting, communication, autonomy, responsibility, and flexibility.

A prime motivator for people is the achievement of objectives and the recognition of peers. Achievement is the successful execution of a task to reach a desired end. Whether employees are working to fasten a bolt to an engine block or developing a competition study, the successful accomplishment of that task represents a piece of the company’s mission (Coffman & Gonzalez-Molina, 2002). Worker’s that have a clear idea of how their task fits into the larger scheme and profit of a company will feel a sense of belonging and importance because they understand the ultimate end and importance of performing that task (Weinstein, 2002). Setting goals is a good way to define an employees’ purpose in a company and helps to set a standard for them to gauge their success. Managers can then focus on the success of the individual by illustrating his or her performance in comparison to the goal, either with public or private recognition. In this way, the organization develops an atmosphere of attainment against

measurable objectives and becomes energized with each win (Nelson, 1997). The process of defining the roles and objectives of the staff brings an invaluable opportunity for sharing communication between the employee and management.

The flow of information in a company can be a powerful tool in motivating its workforce. Communication of clearly stated goals and paths to achievement is the best way to begin developing employee talent Registering and acting on the communication of employees also gives a powerful message about their value to the company and management Employees want their company and team to succeed; and when management uses the input to help them be productive, a sense of empowerment and ownership of the process develops. The open communication also gives a measure of control over their work environment and allows for the improvement of each individual working situation. The reward employees receive for communicating is not always what managers might View as an award. Communication also gives rise to trust between the supervisors and their staff. Trust enables management to give autonomy and to encourage independence, and that trust builds a strong sense of community for the employee.

As the workplace has evolved, the thoughts on worker autonomy have changed as well.  It allows employees to act independently to fix problems, improve procedures, or enhance interactions. Independence, when coupled with good communication, motivates the worker to think about the best interests of the company and further motivates by giving the freedom to act in any given situation. Good managers will define the outcomes but avoid narrowing the task into steps for the employee, trusting the employee to perform the job that he or she has been given to do, allow them to use talent and ingenuity to accomplish that task. An employee that is engaged in the decision- making process feels motivated to ensure the project is done according to business objectives .Autonomy is also a major driving factor in the effectiveness of an organization. An

Organization that is concerned with everyone’s role in achieving overall objectives is more adaptable and flexible. Employees will take responsibility for achieving goals in a broader context and will have less rigidity in the interpretation of job roles. The lack of rigidity will enable problems to be dealt with more efficiently and will give greater satisfaction and empowerment to each employee. An effective and productive organization is the major insurer of employee retention, satisfaction, and motivation.

Employees place a ‘worthwhile job’ above every other employment concern, including money. Responsibility for the success or failure of a project is a large part of creating job worth, When employees are given the tools and autonomy to do a certain project, or work in a particular role, they are motivated to perform brilliantly because they are accountable for that particular function. Responsibility for a project will also give a good employee the opportunity to display talent and creativity in solving a problem or completing a task. When tasks are clearly outlined to stress individual and group accountability, employees feel that management is putting trust and faith in their abilities to perform.

One of the aims of companies should be flexibility with employees.DuringThe 1990’s, companies realized tremendous productivity gains by demonstrating flexibility in the work environment. Schedule and organizational flexibility allow employees to balance home and work more effectively and cause productivity and morale gains as well. Just as previously illustrated with McCormick and Company, more hours worked and time clock punching do not necessarily make a company profitable or effective. Flexibility in work scheduling allows work to be arranged according to the individual’s need. Many companies illustrate how the flexible schedule gives tremendous returns in employee loyalty, retention, and compensation. One company could not attract desirable applicants because it could not afford the massive benefit and financial compensation packages of the bigger firms. The company management decided to move towards flextime, eradicated time clocks, and invented ‘management by wandering around.