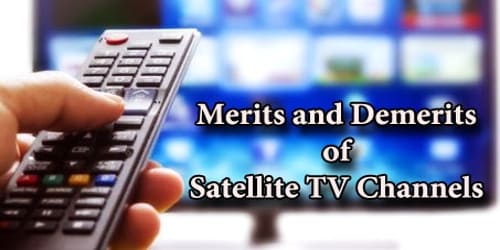 Satellites are artificial objects or machines that are put in orbit around the earth. They relay back to the earth radio and TV signals which are used by different channels to telecast their programs. These satellite channels have brought a tremendous change in the world of education and entertainment of the people. They are highly beneficial. People can watch movies as well as other programs sitting in their houses. Some channels are very informative like the Discovery Channel, National Geographic Channel, Animal Planet and History Channels. Some telecast lives shows and commercial serials. Some of the channels telecast only sports programs. The most watched ones are Ten Sports, Star Sports, and ESPN. Both children and old people are fond of the channels that telecast cartoon films. Some channels telecast news every half an hour and also documentaries. Among them BBC, CNN, are very prominent. Though the channels have contributed a lot in educating and entertaining the people, some channels telecast programs and movies of violent nature. They also show obscene music and films. And I think these channels cause cultural decay and moral degeneration. These adversely affect the children and particularly the young generation. I consider, there should be a government committee to enforce a policy regarding which channels can be permitted to be viewed and which should be censored. Their duties will also be to devise programs in order to augment our own cultural values. And this is how the satellite TV channels can be made to play a positive role and our national culture can be fostered and enriched.