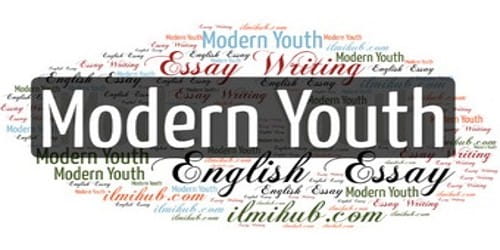 The man has various phases of life, childhood youth and old age. It is only in youth that one comes to taste some of the realities of life. Modern youth, indeed all youth in whatever country, have something in common with the crab. It is a period of lite when the physical mental and spiritual powers of a man near maturity.

Today’s youth, in general, seem at first glance to be hard, sophisticated and wordy. The modern young man has become a rebel to society. He does not accept the normal moral values of society. On the whole, he is better educated than his parents were. There are more schools, more colleges, and universities and more chances for him to develop the best that is in him. He enjoys all the advantages of modern science, television, radio, faster and more efficient travel – all contribute to his urbanity.

This group, if they are working are comparatively “well-off,” and since between the ages of fifteen and twenty, most of them are single, and live at home, very cheaply; they have more actual spending money per head than any other age group. Consequently, their pleasures and their possessions, clothes, make-up in the case of girls, and motor-cycles and things of that kind for boys, are more abundant than they were ten years ago.

This age group to seems to like the same kind of things and adopt similar fashions. Pop music is its theme song. Walkman (cassette player) and youth seem to be inseparable and it is “a hard day’s night” for the rest! The ‘Pop groups’ have set the fashion among many young people, for other things too. The long hairstyle of the modern young man of the West has become almost a status symbol. Clothes for boys have a more distinctive cut and are fashioned from brighter materials.

This, then, is the outer shell of the modern youth, but underneath is the soft vulnerable part. He has his problems just as his parents had at the same age. For some examinations loom forever large and these are, in some ways harder because the competition is keen these days, and the “rat race” so much quicker. In an Age of Technology, great emphasis is laid on technical and written qualifications of all kinds. For others, who are wage earners already, there are problems of balancing the budget, of making ends meet, of pleasing the boss and doing a satisfactory job.

For all of them, there is the difficult process of transition from the child, with very few responsibilities to the adult with very many. How to behave? What to say? Shall I sound or look silly? How to run a banking account or a car? Such questions may seem trivial, but to modern youth, struggling to find his feet in an adult world, they are all important, because youth is, above all sensitive. An advantage of age is that life teaches us not to care too much what other people think, but this is not given to youth and so they are easily hurt.

Questions of religion, of morals, of politics worry them, because this age group, or whatever educational attainment is a “thinking” group. It questions, for the first time, the validity of parental utterances or the sagacity of philosophers and religious leaders. All the time, it is searching for truth and for the answers to life’s problems. It sometimes thinks that it has found them until life shows that has not! Much, far too much, is written, discussed and published about modern youth, its habits and its behavior.

Modem youth is often irritating, but which generation of young people is not? It may have ‘oddities’ which to older people seem very peculiar indeed, but, on the whole, the picture is a bright one. Young people, whether in the East or in the West, enjoy their young and, with help and guidance, will mature to be the citizens and parents of tomorrow. Good citizens and good parents, in these days, will be discussing the foibles and peccadilloes of their own children – the youth of tomorrow. Everywhere in the world, they are fighting for a change.