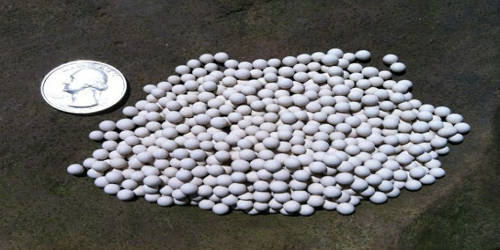 A molecular sieve is a material with pores of uniform size. They are microporous with a tunnel-like pore structure of similar dimensions to small molecules. These pore diameters are similar in size to small molecules, and thus large molecules cannot enter or be adsorbed, while smaller molecules can. It is a general term, but when unqualified, usually refers to artificially prepared zeolites which are sodium, potassium or calcium aluminosilicates.  As a mixture of molecules migrate through the stationary bed of porous, semi-solid substance referred to as a sieve (or matrix), the components of highest molecular weight (which are unable to pass into the molecular pores) leave the bed first, followed by successively smaller molecules. They are artificially prepared alkali metal aluminosilicates. Some molecular sieves are used in chromatography, a separation technique that sorts molecules based on their size.

Molecular sieves are crystalline metal aluminosilicates having a three-dimensional interconnecting network of silica and alumina tetrahedra. The diameter of a molecular sieve is measured in ångströms (Å) or nanometres (nm). According to IUPAC notation, microporous materials have pore diameters of less than 2 nm (20 Å) and macroporous materials have pore diameters of greater than 50 nm (500 Å); the mesoporous category thus lies in the middle with pore diameters between 2 and 50 nm (20–500 Å). Natural water of hydration is removed from this network by heating to produce uniform cavities which selectively adsorb molecules of a specific size.

It has become one of the most reliable desiccants for a variety of applications including:

Molecular sieves are often utilized in the petroleum industry, especially for drying gas streams. They are used for drying gases and liquids and for separating molecules on the basis of their sizes and shapes. For example, in the liquid natural gas (LNG) industry, the water content of the gas needs to be reduced to less than 1 ppmv to prevent blockages caused by ice.

In the laboratory, molecular sieves are used to dry solvent. “Sieves” have proven to be superior to traditional drying techniques, which often employ aggressive desiccants. Many people do not realize all of the applications of molecular sieves that help to improve our everyday lives. Almost every imaginable product has been touched by a molecular sieve in some way.

They are also used in the filtration of air supplies for breathing apparatus, for example, those used by scuba divers and firefighters. In such applications, the air is supplied by an air compressor and is passed through a cartridge filter which, depending on the application, is filled with molecular sieve and/or activated carbon, finally being used to charge breathing air tanks. Such filtration can remove particulates and compressor exhaust products from the breathing air supply.